Wilma is not going to be the last major hurricane of the season: Alpha is already swirling in the western Atlantic 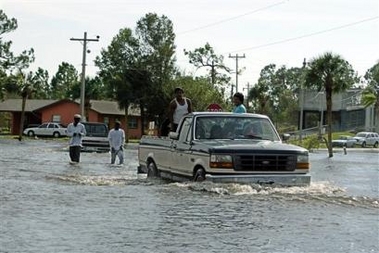 Floridians gradually start massive clean-up operations, trying to handle the huge devastation caused by raging Hurricane Wilma. The Category 3 storm slammed into the southern coast of the USA before dawn on Monday.

Wilma battered southern Florida for six hours, weakening to a Category 2 before strengthening again as it raced across to the Atlantic. Some 3.2 million homes were left without power, affecting six million people. Wilma was the 21st storm of the season and the eighth hurricane to hit Florida in 15 months.

Officials said it was the most damaging storm to hit the Fort Lauderdale since 1950. It flattened homes, ripped up trees and caused extensive flooding in low-lying areas. 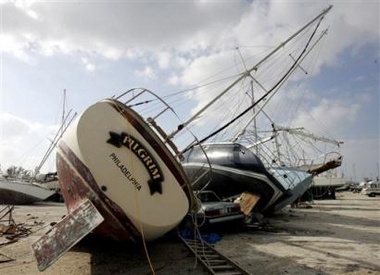 Meanwhile at least 6 million struggled without electricity. Downed power lines and large chunks of debris littered streets from Miami to West Palm Beach, and many in the hardest-hit areas, like Fort Lauderdale, were without water due to large water-main breaks.

President Bush told Floridians to heed the warnings. "These folks are on the ground and they know what they're talking about, and it's important that you pay attention to the messages coming out of the people there to help you in Florida," Bush said during an early-morning press conference.

Reports of heavy flooding in the Florida Keys also said more than a third of Key West was underwater. Officials estimated that more than 90 percent of the Keys' residents ignored a mandatory evacuation warning. Not a single community in the most heavily populated areas of Florida escaped hurricane damage.

A storm surge of up to 15 feet had washed over Key West and the islands to the north. The only road linking the Keys to the mainland, US-1, was under two feet of sea water and was expected to be impassable until this morning, making any post-storm evacuation impossible.

With five weeks still remaining of the 2005 hurricane season, Wilma is unlikely to be the last bad blow Florida will experience this year. For the first time ever, the number of storms in one season has exhausted the assigned letters in the Latin alphabet.

The National Weather Service has had to switch to the Greek alphabet for Alpha, which is already swirling in the western Atlantic on an uncertain course. In Cuba, scuba diving teams in inflatable rafts pulled nearly 250 people from their flooded homes after massive waves, churned by Wilma, swept over the capital's Malecon coastal highway and into adjacent neighbourhoods of old, crumbling buildings.