A top Taliban commander said al-Qaeda leader Osama bin Laden was behind the February attack outside a U.S. military base in Afghanistan during a visit by Vice President Dick Cheney, according to an interview shown Wednesday by Arab broadcaster Al-Jazeera. 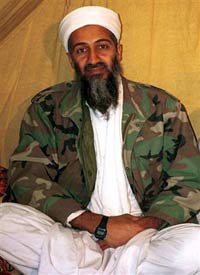 Bin Laden planned and supervised the attack that killed 23 people outside the Bagram base while Cheney was there, said Mullah Dadullah, the Taliban`s main military commander in southern Afghanistan who has had close associations with al-Qaeda.

"You may remember the martyr operation inside the Bagram base, which targeted a senior U.S. official. ... That operation was the result of his wise planning. He (bin Laden) planned that operation and guided us through it. The operation was a success," Dadullah told Al-Jazeera. He did not say how he knew bin Laden planned the attack, and it was not clear when the interview took place.

Deputy White House press secretary Dana Perino said it was "an interesting claim but ... I haven`t seen any intelligence that would support that."

A U.S. counterterrorism official, who spoke on condition of anonymity because of the information`s sensitivity, said al-Qaeda would likely have used more than a single explosion outside the base`s main gate if it were targeting Cheney.

In addition, the official said, it takes bin Laden significant time to communicate from where he is hiding. That wouldn`t offer him the flexibility to order an attack on Cheney, whose stop at Bagram was kept secret in advance of his arrival, the official said.

The U.S. military had said previously it was unclear whether the Taliban knew about Cheney`s visit or whether the timing of the attack was a coincidence.

The Feb. 27 bombing killed 20 Afghan civilians, a U.S. soldier, a U.S. contract worker and a South Korean soldier outside Bagram while Cheney was meeting with officials inside the base. The Taliban claimed the attack was aimed at Cheney, but officials said it posed no real threat to him.

The attacker did not try to penetrate even the first of several U.S.-manned security checkpoints at Bagram, instead detonating himself among a group of Afghan workers outside the base.

Dadullah insisted bin Laden was alive and well. "Thank God he is alive. We get updated information about him. Thank God he planned operations in both Iraq and Afghanistan," he told Al-Jazeera in excerpts that were translated into Arabic.

Parts of the interview were broadcast on Al-Jazeera`s English and Arabic satellite TV channels and were posted on the stations` Web sites. Al-Jazeera, which is based in Qatar, said it planned to show the entire interview later Wednesday, but the interview had still not aired by midnight.

The interview was not the first time in recent months that Dadullah has said bin Laden is alive. On March 1, London television Channel 4 aired an interview in which he said the al-Qaida leader was in contact with Taliban officers. The station did not say when the tape was made.

U.S. officials have said they assume bin Laden is alive but do not have proof one way or the other. He is assumed to be in a rugged area of Pakistan, where remnants of the Taliban are living while mounting attacks inside neighboring Afghanistan.

U.S.-led forces drove the head of the terror network from his Afghanistan haven in late 2001 by overthrowing the hard-line Taliban government after al-Qaida was blamed for the Sept. 11 attacks, the AP reports.

The Taliban were toppled in 2001 by a U.S.-led coalition for refusing to hand over leaders of al Qaeda after the group's Sept. 11 attacks on U.S. cities.

Dadullah gave no further details about the role bin Laden was playing in operations in the two countries where the United States deploys troops.

A senior Afghan security official had said on Tuesday Afghan and NATO troops had surrounded more than 200 Taliban in the southern province of Uruzgan and Dadullah might be among them.

But NATO forces were not involved in the operation, a NATO spokeswoman said on Wednesday, and an Afghan politician from the region said he doubted that Dadullah had been surrounded, Reuters reports.