'Black doctor' robs 100 pensioners and kills 16 of them

Alexander Astashev, 49, looks like an absolutely inconspicuous chubby man. He would come up to his victims having put a hospital gown on and with a phonendoscope on his neck. The man would meet elderly people near drug stores: he was paying attention to those buying expensive medicines. Alexander Astashev would approach an old man or an old woman and pretend to be a kindhearted common man. 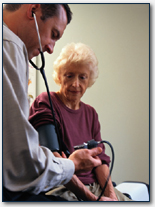 Having chosen a victim, the “doctor” would then express his indignation about unfairly high prices on medicines for the elderly. He would promise to prescribe cheaper medications and conduct a medical examination at home, free of charge. It goes without saying that elderly people were swallowing the bait immediately; the “doctor's” sympathy would move them to tears. Pensioners were happy to invite the “doctor” to come and visit them for an examination. It is noteworthy that measuring blood pressure was everything that Alexander Astashev could do as a “medical specialist.”

When Astashev was through with his primitive examinations, he would prescribe medicines to his patients. After that the doctor would reach out large doses of strong tranquilizers such as benadryl, nozepam or tazepam and eventually offer to have a soft drink for taking the pills.

Strong doses of tranquilizers in a combination with alcohol would make elderly people lose consciousness. The “doctor” would then search every corner of his patients' apartment looking for their savings. Astashev's largest plunder was evaluated at 183 thousand rubles (about $6,500).

The “black doctor,” as the police nicknamed Alexander Astashev afterwards, managed to commit his crimes in several regions of Russia and rob almost 100 Russian pensioners. Sixteen of his patients did not survive the “doctor's” lethal doses.

While the police were busy trying to capture the criminal, the swindler traveled to Russia's south and had a good rest on the Black Sea coast for the robbed money.

Investigators detected Astashev with his cellular phone. The police identified his cell phone number and arrested the criminal in the Kirov region of Russia. The “black doctor” was caught red-handed: officers found a bag of medical properties filled with a doctor's gown, a blood-pressure device and packs of sleeping pills. If investigators prove that the “doctor” was deliberately putting elderly people in a life-threatening state, Mr. Astashev may spend the rest of his life in prison.