Britain's government is investigating allegations that body parts were removed from nuclear workers after their deaths and tested for radiation over several decades, the trade minister said Wednesday. 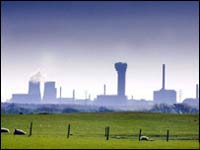 Trade and Industry Secretary Alistair Darling said he authorized the investigation after unions alleged that vital organs were removed from bodies from the 1960s to the 1990s and secretly tested for radiation.

The trade union Prospect claims tissue, bones and other organs were taken without permission from the bodies of 65 employees who had died from cancer, most after working at the Sellafield nuclear plant in northwestern England.

"Removal of organs from deceased radiation workers without consent would be ethically, morally and possibly legally wrong," Paul Noon, general secretary of Prospect, wrote in a letter to the company released to the media. "Whatever the motives, it should not have happened."

Sellafield, operated by British Nuclear Fuels PLC, is one of the largest nuclear engineering centers in the world, with a power plant, fuel production and recycling facilities.

Darling said medical records documented 65 cases in which the company had removed tissue for radiological analysis.

He said an investigation led by lawyer Michael Redfern will focus on why the body parts were taken, who authorized their removal, and whether they had the families' permission.

In 55 of the cases, requests for body parts were made following a coroner's inquest or autopsy, Darling said, suggesting that in most cases, the tissues were removed to help establish the cause of death.

He also said all the parts have since been destroyed, the AP reports.

There was no record of consent for the remaining four cases, it said, adding that did not mean appropriate requests were not made.

But Darling said he wanted the inquiry to find out more.

"It is necessary to establish why these examinations were carried out and whether or not the next of kin were informed and consented to this analysis," he said. "It is also necessary to establish whether or not these examinations were carried out following the correct and proper procedures and whether the data obtained was used appropriately and with the necessary consents."

Most of the workers involved were employed at Sellafield, but one had worked at the Capenhurst nuclear site in central England before transferring to Sellafield. Six worked at Aldermaston, Britain's nuclear weapons research center, and one at the Springfields nuclear site in north west England, Reuters reports.