After the destructive Katrina hurricane hit the southern states of the USA, natural forces attacked Japan

After the destructive Katrina hurricane hit the southern states of the USA, natural 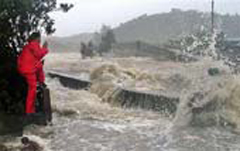 disasters are watched with close attention. One of such examples is Nabi typhoon (which means butterfly in Japanese) that hit Japan at first and is now posing a threat to the Russian coastland.

The aftermath of the typhoon that hit the southern Japanese islands is as follows: seven people were killed, 81 were injured and 13 are missing. 30 thousand houses were damaged. More than 110 thousand people were evacuated from Kyushu Island. Many of them had to be forced to leave their home. As a spokesman for the police department reported on Tuesday, typhoon greatly hampered communication in the south of Japan. 452 domestic flights were cancelled, ferry communication between Japanese Islands and South Korea is cut off. Freeway traffic in the country's south was stopped. Shinkansen high-speed trains do not run at the moment.

More than 300 thousand houses on Kyushu Island were left without energy because of the broken wires. Many of the enterprises stopped functioning for security reasons. The shipment of oil products stopped.

Sakhalin and Southern Kurils are preparing for the typhoon. Although Nabi will weaken by that time, it can be dangerous to a certain extent.

Sea rescue coordination centre asked captains off all the vessels in the Southern Kurils region to hide from the coming Nabi in the nearest bays, lee shores and ports, RIA Novosti reports.

A severe storm is expected here on the night of 8 September, because of typhonic gusts at the speed of 35-38 meters per second. The height of waves will probably reach eight meters.

Weather forecasters say that southern and central regions of Sakhalin will be left to the mercy of winds anв weather on Thursday. Hydro meteorological services expect heavy rain, more than 30 millimeters of precipitation and the gusts of wind at the speed of 30-33 meters per second. Experts say that Sakhalin will be in the grip of the typhoon for about twelve hours.

Meantime, the natural forces can also affect Malaysia. This country can suffer from the typhoon as powerful as Nabi, experts say.