Looters fill garbage cans with clothing, jewelry, food and other goods and float them down the streets

The total evacuation of people from Louisiana's largest city, New Orleans continues. The governor of the state, Kathleen Blanco, decided to evacuate everyone else, who stayed in the city. According to the governor, all the people, including those huddled in rescue centers and in the sports complex, must leave the city. 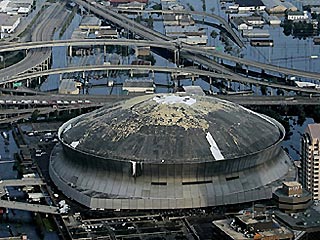 Tens of thousands of people will have to be evacuated from their shelters in New Orleans. Everyone, who found shelter in the huge Superdome stadium, will have to leave as well. About 5,000 prisoners that serve their sentences in penitentiary institutions of New Orleans are expecting to be evacuated from the disastrous territory too. Local authorities are currently deciding how the prisoners will be guarded during the evacuation, Itar Tass reports.

Rescue teams were picking up the lucky survivors the whole day Tuesday. Hundreds, probably even thousands of people remain stranded on the roofs of their drowned houses. US Coast Guard pilots evacuated over 1,200 citizens yesterday.

The police blocked all highways leading to the city not to let people return to New Orleans: there is neither electric power nor drinking water in the city at the moment.

In the meantime, the historical part of the city, the so-called French Quarter, is being currently looted, which considerably hinders the process of the rescuing operation. According to AP, people were seen running out from a Walgreens drug store in the French Quarter Tuesday morning, carrying grocery baskets and coolers full of soft drinks, chips and diapers. When police finally showed up, a young boy stood at the door and shouted a warning - and the crowd scattered. Looters fill garbage cans with clothing, jewelry and other goods and float them down the streets, WDSU.com website wrote. 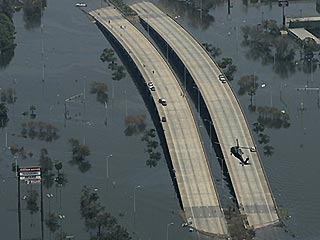 New Orleans is plunging deeper into chaos with death toll and floodwater rising. The number of victims can be numbered in the hundreds. At least 100 people were reported killed in the Mississippi county of Harrison, home to Biloxi and Gulfport. Biloxi spokesman Vincent Creel told Reuters that a powerful nine-meter wave of water that hit the town during the strike of the raging hurricane caused the most serious destruction.

The intestates are impassable, the bridges may be unstable and no one knows if the buildings can withstand the damage brought by Katrina, the governor said after flying over the region. "We saw block after block, neighborhood and neighborhood inundated," Blanco said, her voice breaking with emotion. "It's just heartbreaking,” AP quoted Governor Blanco as saying.

It has recently become known that a group of Russian students suffered from the consequences of Katrina hurricane in New Orleans too. Two of the Russian students managed to call their parents in the town of Stary Oskol in Central Russia. Two girls, named Anna Gamova and Evgenia Yaroshevich, are staying on the roof of a drowned house. The students have neither water nor food supplies. Panic has gripped the girls: they see no one who could help them.

The mother of one of the above-mentioned students said that she had received a call from her daughter, who told her that 30 Russian students had been trapped in a flooded house in New Orleans. Four of them study at the University of Perm (in Russia's Ural). The young people came to the USA to intern in New Orleans.

”They have been staying in the building for three days. Every day they have to go one floor up as floodwaters rise. The girls cannot contact any rescue service, their cellular phone batteries are low. They do not have any drinking water either,” a woman said.

The woman added that Hurricane Katrina cut the Russian students from the rest of the world in Downtown Gravier Street, 837. Students' parents want to attract rescuers' attention to their trouble.

A source from the administration of the Perm region said that the Russian students were sitting on the rooftop of one of the flooded buildings in New Orleans. The regional administration is currently trying to contact the Foreign Affairs Ministry of Russia and the Russian embassy in the USA to specify the information about the students.