Last night two Moscow schoolgirls did away with themselves. Bodies were found at 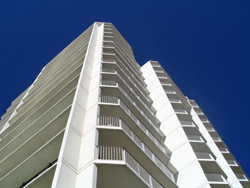 about 2am local time on the ground near one of the entrances of the apartment block. Moscow girls born in 1989 and 1988 committed suicide jumping from the top floor of the building. The reasons for the double suicide still remain unknown. However the place where the girls took their final decision was established exactly: their possessions were found at the stairs landing near the lift on the 16th floor.

It is sad to admit that suicide becomes the most popular way of solving personal problems among teenage schoolchildren. Many of them do not realize what they are doing until the very moment of death. Most frequently those who commit suicide are girls left by their boyfriends. However, some cases are really odd. Last December a woman and her 20-year-old daughter committed suicide in their apartment in the Western part of Moscow. 47-year-old woman cut her veins with straight razor blade, while the girl poisoned herself with medicines. Both left notes where they claimed their suicide was their free will. It is obvious that often it is impossible to find out the reasons for the suicide as in the case with the schoolgirls. Usually local prosecutor's office surmises that people were probably forced to kill themselves and were victims of somebody's evil plan, but then the case is closed as there is not enough evidence for this evil plan. As far as the girls' suicide is concerned the case also was initiated by the Cheriomushkinskaya Prosecutor's Office under the article 110 of the Russian Criminal Code (“Reduction to Suicide”).

Nevertheless not only Moscow schoolchildren go crazy and step down from the skyscrapers' balconies into oblivion. Two years ago a double suicide was committed in Saint Petersburg: 20-year-old Olga Emsa and 26-year-old Evgeny Boitsov jumped from the top of the 16-storeyed apartment block, tying their hands together with handcuffs from sex-shop. As it was clarified later both Olga and Evgeny belonged to some suicide community, which exists in St. Petersburg for several years and welcomes young people who suffer from heartache. In other words these are people with mental disorders. According to the unchecked data, the founder and the head of this community Father Grigory communicates with his “congregation” through the Internet. Members of this sect as it is called by the citizens include even parents of the young sufferers and participate in philosophical and circumreligious conversations, leaded by their guru. “We are dead, we have different interests from living people”, one of the ‘sect members’ says. The pretentious aim of the “suicide circle” is to prevent young people from committing suicide. However, its website gives the opposite impression. It provides the list of medicines, which poison easily, the list of people who tried all these poisons and the names of those who succeeded in their attempts.

Of course there are reasons to believe that many of such suicides are committed because of one-way love. The Moscow girls’ suicide is one of the examples. Last year in winter a teenage girl jumped from the bridge into Ob river in Novosibirsk (her body was not found), leaving a note where she asked her loved one for forgiveness. It is said that he treated her “just like a friend”, although the girl begged for love. However, the boy was not found guilty of her death. It was established that the girl was not forced to kill herself.