An armed man who hijacked a Mauritanian plane to Spain's Canary Islands Thursday was overpowered by passengers and crew before he was arrested by police who boarded the plane shortly after landing, government and airline officials said. 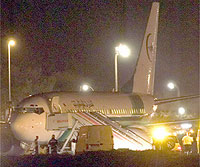 The man was overwhelmed by passengers and arrested when police stormed the Air Mauritania 737 shortly after the aircraft landed at Gando military base on Gran Canaria island, Spanish Interior Ministry official Carolina Darias said.

Twenty-one of the 71 passengers - mostly Spaniards and Mauritanians - 21 were treated for slight injuries, a Las Palmas police spokesman said. The most seriously affected was a pregnant woman was treated for severe shock.

Police said the man had been carrying two loaded handguns. Police did not say when during the incident he had been overpowered.

Mohamed Ould Mohamed Cheikh, Mauritania's top police official, said the hijacker was a Moroccan from Western Sahara who wanted to immigrate to France.

The man had tried many times to obtain a visa at the French embassy in the Mauritanian capital, Nouakchott, where he had lived for a few months, Mohamed said. The hijacker's identity wasn't given, the AP reports.

The Air Mauritania plane had taken off on a domestic flight from the Mauritanian capital Nouakchott. Authorities said the hijacker, a Moroccan, tried to have the flight diverted to Paris but pilots told him there was not enough fuel.

The plane eventually landed at military airport Gando on the island Gran Canaria, where it was immediately surrounded by police. The hijacker’s motives were as yet unclear, DPA reports.

The hijacking came on same day that Spain began the trial of 29 people, mostly Moroccans, for the 2004 Madrid train bombings which killed 191 people, and days after al Qaeda called for attacks on Mauritania's rulers.

"I call especially on our people in Mauritania ... to take a sincere jihadi stand against treacherous rulers who recognised Israel and betrayed the Islamic nation," Zawahri said.

Jose Segura, a Spanish government representative in the Canary Islands, told national radio he could not confirm or deny talk of gunshots, Reuters reports.

"Fortunately the hijacking incident has ended favourably," Segura said. He said the hijacker gave himself up and police had not stormed the plane”.