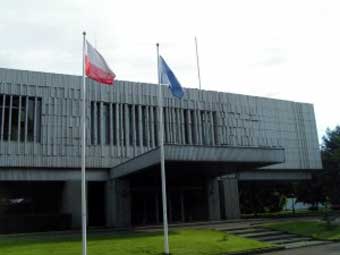 The attack on the Polish diplomat occurred at about 1:00 p.m. not very far from the Polish embassy yesterday. Colleagues of the assaulted Polish citizen said that Mr. Reszuta went out of the building of the embassy immediately after a business meeting with the ambassador. The aggrieved person told the Moscow police that he had been attacked when he decided to let three or four men pass him by. Having overtaken the foreigner, one of the strangers hit the Polish national in the face. The blow knocked the diplomat down, and the assaulters started beating him.

Marek Reszuta said that there was a moment when he lost his consciousness. When he came to his senses, the perpetrators had been gone. The beaten diplomat returned to the building of the embassy without assistance and reported the assault to one of the embassy's guards. The guard immediately called the police and the ambulance.

Doctors concluded that the diplomat's face, chest, legs and arms had been bruised as a result of the beating. The medical conclusion also said that the diplomat's life was out of danger and that he would soon be discharged from the hospital. Marek Reszuta told the police that he had noticed a group of men not very far from the building of the embassy prior to the attack, although he was uncertain if they were one and the same people.

It goes without saying that spokespeople for the Polish diplomatic mission in Moscow expressed their concerns in connection with a “very dangerous situation.” Poland's ambassador to Russia, Stefan Meller, stated that he would like to have an urgent meeting with the Deputy Foreign Affairs Minister of Russia, Valery Loshchinin, to discuss the current situation with the Polish embassy in Moscow and develop certain measures to prevent similar accidents in the future.

The Russian embassy in Warsaw has already received a note from the Foreign Affairs Ministry of Poland in connection with the beating of the Polish diplomat in Moscow. A spokesman for the Polish ministry, Tomasz Szeratics, stated that Poland was highly concerned about yesterday's accident in Moscow. The official added that the Foreign Affairs Ministry would take all necessary measures to clear up the matters. The Foreign Ministry of Russia expressed its regret about the accident with the Polish diplomat.

Andrzej Uriadko, a telecommunications worker at the Polish embassy, who was attacked by two men in Moscow four days ago, is still hospitalized. The scandals started after the incident, which occurred on July 31, when a group of Polish skinheads beat and robbed three children of Russian diplomats in Warsaw. Polish diplomats do not see any connections between all of the occurrences, whereas the director of the Moscow Bureau for Human Rights, Alexander Brod, does not exclude that Russian nationalists could be involved in the attacks against Polish diplomats in Moscow.