Mummified man found in his apartment sitting down for 6 years

Dwellers of an apartment building in the city of Tula, central Russia, were horrified to learn of a discovery made in one of the apartments. The mummified body of a tenant was found in a sitting position in the kitchen of his apartment. The tenant had been dead for six years. 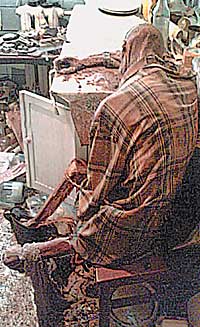 Mummified man found in his apartment sitting down for 6 years

One hazy morning a telephone started ringing in an office of Mark Ignashin, an investigator with the prosecutor’s office of Tula’s central district. “This is a duty officer of a district police station. We’ve received a report on a mummified body found in apartment building No 142 on Lenin Street. We’re sending a vehicle to pick you up, Mr. Ignashin,” said the officer and hung up.

No sooner had Ignashin stepped into a typical Khrushchev-era tiny apartment than he became aware of a pungent putrid smell. A mummified body in a plaid shirt was seated at a kitchen table. The brownish parchment-like skin covered the mummy’s dried-up bones. An empty vodka bottle and a glass sat on a dusty table. One of the policemen brought a bunch of newspapers from a living room. All the newspapers dated back to February of 2000.

Valentina Muradova was brought in as a witness to the official search. The woman peered at the mummy for some minutes until she finally recognized her neighbor called Vladimir Ledenev, 68, who vanished without a trace six years ago. According to police records, Ledevev had earlier spent four years in prison for battery. His neighbors told the police that the man had started drinking heavily after his mother passed away ten years ago. Ledenev was frequently seen collecting empty bottles for a living because his pension was pretty small. Eventually, Ledenev disappeared at the beginning of 2000.

“We reckoned that he’d moved somewhere else or checked himself into a hospital, he had TB,” said Irina Borodina, one of the neighbors. “Then we thought he’d ended up in prison again though our local policeman knew nothing about Ledenev’s new brushes with the law,” added the neighbor.

“A man just vanished from your house. Has anybody felt anything strange and tried to raise the alarm?” Ivanshin asked the neighbors.

“He was a standoffish kind of man, he rarely talked to us. He kept away from the neighbors most of the time. He was always short on money. People from a real estate agency tried to talk him into swapping his two-room apartment for a smaller place, promising him a handsome bonus for the deal. He just told them to get lost,” said Borodina.

The neighbors told the investigator that quite a few people tried to contact Ledenev for several months following his disappearance. Workers from a housing management office would knock at his door in an attempt to hand over utilities bills; a postman would do the same on the day when pensions were delivered. Ledenev’s son and nephew also tried to see him but to no avail. Then the whole world seemed to forget about Ledenev though he owed several thousand rubles in unpaid bills to a housing management office. It was obvious that the door of Ledenev’s apartment had been locked from the inside at a deadbolt and chain. For some strange reasons, nobody grew suspicious about the circumstance. All those years the lights and a fridge were on in the apartment.

“One of our neighbors, an obese man, died a sudden death a few years ago. Two days later people could feel the smell and soon found out what happened. However, in this case we didn’t smell anything. Maybe there was no smell because he died in winter; the temperatures were very low at the time. Besides, the guy was very thin, he looked like a mummy while still alive.

And you can imagine what kind of smell was usually hanging about that place. Ledenev was an alcoholic, by and large,” said Borodina.

The grisly discovery was made by workers of a housing management office as they were making their rounds in the apartments of those who owed large sums in unpaid utilities bills. According to a spokesperson for the prosecutor’s office, the death of Vladimir Ledenev did not entail any investigation since the police found no evidence indicating that the victim had died a violent death. Likewise, sanitation authorities refused to carry out decontamination of the apartment despite a request filed by a local police station. You have no problem after getting rid of a man who causes this problem, as Josef Stalin used to say.