Rescuers lifted speleologist Andrey Sizikov from Voronya Cave in the republic of Abkhazia on the ground surface, a spokesman for the regional department of Russia's EMERCOM told Interfax. “The scientist was retrieved from the cave and was given efficient first aid treatment. Doctors estimated his state of health as stable,” a press service spokesman said. 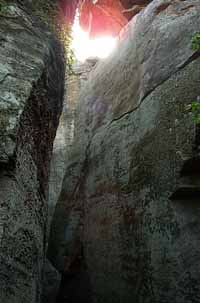 Speleologist Andrey Sizikov from Khabarovsk (the Far East of Russia) fell down in the 400-meter cave from the height of about ten meters. The man was blocked up in a narrow gap between the stone walls. Rescuers started lifting the injured man from the abyss on Monday.

The man could not move independently: he suffered fractures of his spine and legs.  Andrei Sizikov participated in the expedition of the International Speleological Group along with specialists from Russia, Ukraine, England, Germany, Italy, Greece, Poland, Australia and other countries.

Rescuers said that the operation to retrieve the 23-year-old specialist from the underground cave was extremely difficult. The man was blocked at the depth of 300 meters under the ground; he was supercooled and suffered severe injuries.

”It is extremely hard for a human being to survive under the ground because of cold, darkness and very narrow spaces. We had to widen the cave manually and with the help of punching units – that is why it took us so long to complete the operation,” Yury Fomin of Russia's EMERCOM said.

The expedition to Voronya Cave in the republic of Abkhazia, in Russia's south, has a goal to confirm its record depth – 2,080 meters. Speleologists were supposed to study all branches and tunnels of the cave. Andrey Sizikov fell off the climbing rope on July 20th. A group of 15 rescuers started the operation to lift the scientist on the ground surface the same day. However, they could advance five or six meters an hour.

Andrey could see the light and take a breath of fresh air on the ground surface on July 26th, after six days of the underground captivity.