If either astronauts or NASA specialists doubt about the return of the shuttle to Earth, scientists will have to take urgent measures to save the astronauts

US space agency NASA confirmed that a piece of tile came off Discovery Shuttle as it blasted off in space yesterday. A similar incident resulted in the crash of space shuttle Columbia, when seven astronauts were killed and further shuttle flights were suspended. If Discovery is not allowed to return to Earth, it will cause a state of  emergency in space: seven astronauts on board the International Space Station will have to be rescued urgently, for they will be left without any means of transportation to return to their homes. 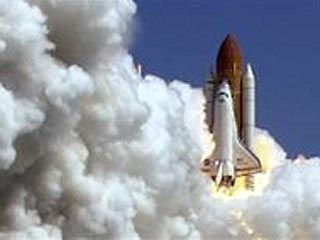 It turned out today that the separation of a tile piece was not the only incident, which occurred during the long-expected launch of Discovery into space. The shuttle struck a bird soon after the take off. It is not known for the time being, if the incident with the tile piece was connected with the bird.

Discovery lifted off from the launch pad according to the schedule and entered the orbit nine minutes later. It was revealed several minutes after that that a video camera installed on the central fuel tank of the spacecraft registered the separation of a large piece of tile from the tank. It is not known if the piece damaged the shuttle insulation: NASA specialists will be able to answer this question after the detailed step-by-step analysis of the video tape.

The tile, which protects the shuttle from heat, flew off the spacecraft in the area of the door, which closes the front chassis compartment of the shuttle. This part of Discovery is exposed to high temperatures most during the homecoming stage of the flight.

According to instructions, the crew of the shuttle will dock the International Space Station and conduct a detailed analysis of Discovery's insulation. Two members of the crew will walk into space for this purpose.

If either astronauts or NASA specialists doubt about the return of the shuttle to Earth, a grand operation to evacuate the crew of the shuttle from the International Space Station will take place on the orbit. Discovery will most likely become a large piece of space garbage, for it will be impossible to either dock it back to the ISS or return it to Earth. Another US shuttle, Atlantis, will probably rumble into space to rescue five of Discovery's seven crewmembers (the shuttle can house the maximum of seven astronauts). The two remaining astronauts will have to be rescued with the help of another shuttle, the Kommersant newspaper wrote.