The USA has conducted its first official military operation in Somalia since 1993. Pentagon officials continue to emphasize that it is not an incursion but the pin-point destruction of terrorists in the African country. This strategy is not likely to become a great success. However, it stands the reason that Somalia is the stronghold of terrorism. One of al-Qaeda leaders once described the country as a “pot of gold.” 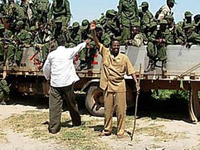 US warplanes struck targets in Somalia’s south near the border on Kenya. An official of the Somalian government said that it was the territory where a large number of al-Qaeda gunmen were hiding. The Washington Post wrote that information for the air strike was provided by Kenyan and Ethiopian special services and CIA agents.

As it usually happens with US military initiative, the operation has led to numerous victims. According to Somalian and US defense authorities, two high-ranking al-Qaeda terrorists were killed in the attacks. One of the killed terrorists is a Sudanese man, a specialist in explosive technologies who reportedly had close links with the al-Qaeda leadership.

The second of the terminated terrorists is a citizen of Comoro Islands, an extremist suspected in the organization of terrorist attacks against US embassies in Kenya and Tanzania in 1998 when over 200 people were killed.

US special services say that the terminated Sudanese national was an assistant to Gouled Hassan Dourad, the leader of the al-Qaeda division in Somalia. Dourad is currently being held at Guantanamo prison where he was taken to from one of CIA secret jails.

The US air raids on Somalia have become the country's first official defense action taken in the African country since 1993, when US troops failed to occupy Mogadishu due to fierce resistance of the local gunmen. Then-President Bill Clinton ordered to withdraw the troops. Al-Qaeda perceived the decision as their triumphant victory over the superpower.

The current operation does not mean that the US is preparing for another military incursion, Pentagon officials say. With the air strikes the USA is exercising its new doctrine which stipulates the destruction of terrorists all over the world. Therefore, the Pentagon officials say, the USA does not interfere in internal affairs of Somalia, but struggles against international terrorism.

Somalia is one of the most unstable regions in the world. Eastern Africa and Somalia have been of great interest to al-Qaeda terrorists. The country became especially attractive for terrorists due to the absence of government. Chaos has been reigning in Somalia after the coup of 1991.

One of al-Qaeda top terrorists said that Africa was a pot of gold for the international terrorist network. Poverty and conflicts allow them to cross all borders and smuggle weapons. Terrorists view the following countries as especially perspective for their subversive activities: Egypt, Algeria, Somalia, Sudan, Mauritania, Morocco, Libya and Chad.