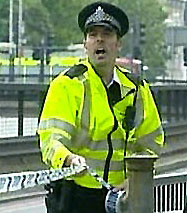 British emergency services received information about new explosions in London's Tube at around midday today. Rescuers started emergent evacuation of passengers from three stations of the Tube – Warren Street, Oval and Shepherd's Bush. The traffic on the two lines of the English underground was stopped in connection with the accident. Smoke could be seen above a car of one of the trains, a spokesman for London's fire service said.

Eyewitnesses were the first to report today's explosions in the Tube. A self-made bomb filled with nails blew up on Warren Street station, Sky News reported. Authorities decided to close three lines of the London Tube immediately after the first reports of new bombings. Hammersmith & City, Victoria, Northern и Вakerloo lines of the Tube have been closed for the time being.

Another explosion occurred in a double-decked bus in Hackney, in the east of London. No one was reportedly injured in the blast. TV reports from the site of the accident show flames of fire behind the image of the damaged bus.

"There was something like an explosion, the windows blew out, but no one suffered. The people left the bus immediately," the BBC quoted the bus driver as saying. The driver added that he did not notice anything suspicious in the bus. Eyewitnesses said, however, that they could see a suspicious rucksack resting on one of the rear seats in the saloon.

British media outlets report that one person has been wounded on Warren Street station. The London police report about four explosions, which occurred in the British capital today, July 21st, Euronews says. Three explosions occurred in the Tube, whereas the third bomb blew up in bus No.26. The chairman of the London police said that the bombs, which the terrorists used during today's attacks, were less powerful in comparison with recent terrorist attacks, which rocked the heart of London two weeks ago.

Ivan McCracken, one of the witnesses, told SkyNews that a man of the Italian origin told him that he had seen the moment of one of the explosions in the Tube.

"He told me he had seen a man carrying a rucksack which suddenly exploded. It was a minor explosion but enough to blow open his rucksack. Everyone rushed from the carriage. People evacuated very quickly. There was no panic. I didn't see anyone injured but there was shock and fright. There was a smell of smoke. The man who was holding the rucksack looked extremely dismayed." The man said.

British media outlets report that the explosion has most likely been caused with the detonator, but not the bomb itself.

Several passengers were seen fighting in London's Tube prior to one of the explosions. "Three people were fighting with a man, who was wearing a backpack. There was a woman with a child nearby; the child was crying," a female witness told SkyNews.