The leader of Chechen terrorists, Shamil Basayev, apparently starts another anti-Russian campaign with the use of suicide bombers

The police UAZ vehicle was exploded in the settlement of Znamenskoye, Chechnya, at 1:30 p.m. Moscow time yesterday. Fourteen people, including eleven law-enforcement officers and three civilians, were killed as a result of the terrorist act, Deputy Internal Affairs Minister of Chechnya, Akhmed Dakayev, told Interfax Tuesday. 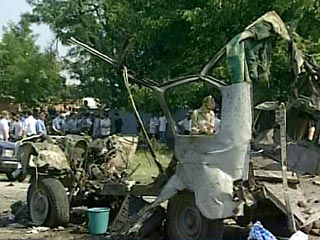 According to the official, there were two teenagers, aged 13 and 14, among the victims of the terrorist act. Twenty people were severely wounded as a result of the blast. The UAZ vehicle blew up in the center of the town of Znamenskoye, not far from a local school.

Chechen terrorists attacked the vehicle with automatic fire, when UAZ was traveling along Lesnaya Street, near local School No.1. One policeman was killed in the shootout. The vehicle blew up when a group of investigators and police officers arrived to the site of the battle.

Chechen President Alu Alkhanov stated that it was Shamil Basayev, the leader of Chechen terrorists, who organized the terrorist act. “It does not matter for him, who dies – a military man, a policeman, a woman, or a child. Blood is much more important for him,” Alkhanov said.

The power of the bomb, which the terrorists used, made up eight kilograms of TNT equivalent.  The terrorists fired at the UAZ vehicle to attract policemen's attention. They placed the bomb in the car prior to the attack: the vehicle was used as a lure.

It is noteworthy that yesterday's terrorist act took place in one of the most peaceful areas of the Chechen republic, the Echo of Moscow radio station said.

While Chechnya is mourning the victims of yesterday's terrorist act, the authorities of the republic believe that the explosion was organized by terrorist No.1, Shamil Basayev. Other terrorist attacks may follow yesterday's accident in Chechnya's Znamenskoye, local police officers believe.

”I do not know, who organized the explosion, - the commander of the Chechen special police unit, Ruslan Akhmadov said. – However, we have the information, which says that extremists have prepared 15 suicide bombers for terrorist activities. They do not have enough energy to conduct large-scale operations, of course. The people do not support them anymore, everyone is tired of the war and want to lead peaceful lives. All that guerrillas can do is to blow up bombs,” the official said.