A person, whom British terrorists attempted to hire as a suicide bomber, shared his information with the press. The man's story proved the supposition of London investigators, who assumed that there were more than just four young suicide bombers on Al-Qaeda's list. 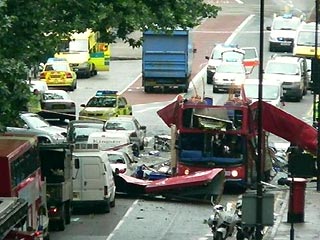 The English were shocked with the news that the terrorist attacks, which rocked London's center on July 7th had been performed by their country-fellows. It has become clear now that there is a large group of Islamic radicals conducting subversive activities in UK. Osama bin Laden's emissaries performed a special operation several years ago in Britain, seeking potential Shakhids, Newsru wrote.

The “unsuccessful” suicide bomber, Amir Khan (the man conceals his real name) is 18 years old at the moment. His parents arrived in Great Britain from Pakistan. When the young man was offered to become a suicide bomber, he was 14 or 15 years of age. Amir said that two men approached him one day as he was going to a mosque. “They said that they would show me something interesting and I followed them,” Amir Khan said.

Terrorists blast the capital of 2012 Olympics

The young man acknowledged that he followed the men simply out of curiosity. “They offered me to sit down in front of a TV set and played a video tape with the footage of American soldiers killing Afghanis. I was about to throw up. It was horrible and naturalistic footage,” said he.

The men told the boy that he could help them take revenge on the killed brothers and sisters. They asked Amir if he had ever thought of committing suicide. The boy only answered that he would often try to understand self-murderers' thoughts. The men continued watching the boy: they would watch Amir praying in the mosque and communicating with his classmates.

Amir believes that he was a perfect person to suit the role of a suicide bomber. “I was young, influence-liable and I never had any problems with the police. There was a hard period in my life, when my father died. They were probably aware of that and tried to use my inner state,” said he. The men also told the boy that his heroic act of committing suicide would send him to paradise, where he would stay for eternity.

Amir Khan eventually turned down the suggestion. Some of his friends managed to convince the young man that the venture would not end in anything positive. In addition, the boy was trying to follow his father's example, who was a hardworking, kindhearted man. Amir told the men that it was his life, in which he was making decisions for himself.

Amir Khan said that the two men simply disappeared from his life after his refusal to become a Shakhid bomber. “I was afraid of them, and I was happy when they finally stopped following me,” the young man said. “I hope that my story will help the police investigate the events of July 7th,” Amir said.

It is an open secret that Islamic fundamentalists traditionally find refuge in Great Britain. The British authorities were certain though, that terrorists would be running their subversive activities anywhere but not in UK. Great Britain is a home for 1.6 million Muslim people, who go to 1,500 mosques to pray and can join approximately the same number of Muslim organizations. However, Britain had to pay a very high price for its politically correct views. British authorities acknowledge that about 3,000 British nationals were trained in Al-Qaeda camps, but only ten percent of them stayed aboard.

Prime Minister Tony Blair is to hold a meeting with the leaders of the British Muslim society on Tuesday to discuss consequences of the terrorist attacks in London.

About 200 British citizens – not immigrants, but native Brits - convert in Islam every year. The money to fund British terrorists' activity is received from Iran, Libya, Saudi Arabia and Syria. Hamas, Islamic Jihad and Hezbollah have their offices in London. Afghan Talibs used to have headquarters in the British capital too.

It is noteworthy that the British government refuses to deliver terrorists to other states. The story with Akhmed Zakayev – an emissary of the now-eliminated fugitive Chechen President, Aslan Maskhadov, - is not the only one at this point. British officials have recently stated that they would deliver Zakayev if only Russia could prove his implication in terrorist activities. Last year, Great Britain refused to extradite the former Iranian diplomat, Hade Soleimanpour, who was suspected of being involved in the explosion of a Jewish cultural center in Buenos Aires in 1994. The blast killed 85 people, but the British court acquitted the diplomat.