An Iranian military plane crashed at an airport in Tehran on Monday, killing 38 people on board. The Russian-designed Antonov-74 belonged to Iran's Revolutionary Guards, the ideological wing of the Islamic Republic's military. 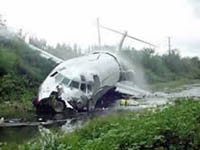 Air safety experts say Iran has a poor record with a string of crashes in the past few decades, many involving Russian-made aircraft.

U.S. sanctions against Iran have prevented it from buying new aircraft or spares from the West, forcing it to supplement its ageing fleet of Boeing and Airbus planes with aircraft from the former Soviet Union.

A military plane crashed in January, killing at least 11 people and another military plane hit a tower block in Tehran in December last year, killing 94 people on board and at least 22 on the ground, Reuters reports.

The plane was heading for Shiraz in the south of Iran, the television said.

Mehrabad international airport is used for civil and military purposes. It is situated in a western district of the capital.

Last December an army Lockheed C-130, bought from the United States before 1979, crashed in a Teheran suburb after takeoff killing its 108 occupants, many of them journalists, AFP reports.

The plane crashed shortly after taking off from an airport in Tehran, the report said.

It did not specify when the crash occurred or give further information about those killed.

The Revolutionary Guards are an elite group in Iran , widely believed to be strongly influential under the leadership of President Mahmoud Ahmadinejad, the AP reports.