A female resident of the Bashkiria republic slashed her lover with an axe and made meat chops, meat dumplings, meat-jelly, sausages from his body. Afterwards she invited her neighbors to dinner. Friends and the 15-year-old son of the woman all praised the killer’s cooking skills. The people could not even think that they were eating human meat. The festive dinner was interrupted when one of the guests went to the kitchen, opened the fridge and saw human remains there. The court sentenced the cold-blooded killer to eleven years in prison. 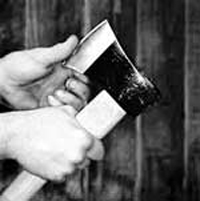 The horrible tragedy took place in the town of Sterlitamak in 2005, shortly before the New Year. Police officers said that the 44-year-old woman killed her lover as a result of a fight. The two people argued over jealousy: the woman believed that her man was cheating on her. The woman flew into rage, grabbed an axe and slashed the young man on the head several times. The man died of severe injuries instantly.

The view of the man’s dead body and blood flowing out of his head did not stop the jealous woman. She cold-heartedly dismembered the body, put the man’s head into a garbage can and used the rest of the body for food.

Several hours later the killer was mincing her lover’s meat for meat dumplings and chops. She made meat jelly from the man’s hands and feet.

When the New Year dinner was ready, the woman invited her neighbours for the party. When investigators were interrogating the killer’s friends, they said that the table was groaning with meat dishes. One of the guests noticed that the dishes were rather unusual to taste: the meat had a sweet flavour to it. The proud “cook” said that she was lucky to find wonderful meat on a local market.

The slaughterer was exposed incidentally. One of the guests went to the kitchen and decided to look into the fridge simply out of curiosity. The man saw a severed human arm in the freezer.

The woman pleaded guilty to manslaughter during the first interrogation. She added, however, that she did not want to kill her 26-year-old lover. She was defending herself when he started beating her, she added.

It was later revealed, though, that the woman had committed her crime in a state of alcoholic intoxication. The killer hardly has any memories left of how she was dismembering the dead body and why.