Emergency services continue counting the victims of the horrific terrorist attacks, which rocked the heart of London yesterday, on July 7th.  There is still no precise information on the number of casualties. Up to 75 people have been reportedly killed in the attacks and about 700 were wounded. Doctors say that up to 100 people have been hospitalized in severe condition. 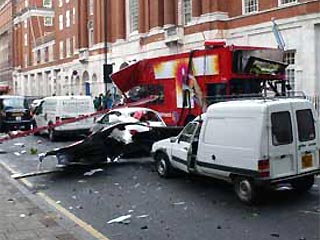 According to official data, the blasts killed 38 people. Seven people died in the tunnel next to the Liverpool Street Tube station. Twenty-one people were killed in the tunnel between Kings Cross and Russell Square stations. Seven Tube passengers were killed near the station of Edgware Road. Bus explosions killed 2.

British Prime Minister Tony Blair stated that London had suffered a barbarian terrorist attack, which was timed to the opening of the Group of Eight summit.

Rescuers continue working in the London Tube, where a part of the tunnel collapsed after one of the explosions. Rescuers say that dozens of bodies will most likely be found under the rubble of the tunnel.

The transportation system of London is still partially paralyzed because of yesterday's attacks. City services gradually return to their usual working regime. The traffic of passenger buses has been resumed in the city's center, Itar Tass reports. The majority of the Tube lines started working on Friday morning. Two lines, which were damaged with the attacks most, remained closed, Interfax says. Heathrow Airport reportedly operates without interruptions. 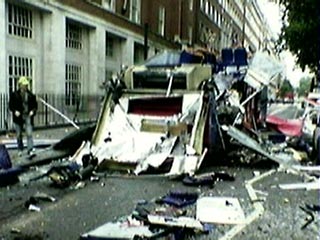 A lot of companies, banks, stores and entertainment facilities will be closed in London on Friday. Several firms recommended their employees to work from home, using telephones and the Internet.

The terrorist attacks in London immediately affected all international financial and commodity markets. The reaction can be compared to last year's explosions in Madrid. The British pound sterling suffered most on the currency market.

The stock market had a more serious reaction to yesterday's blasts in the center of London. Leading European indexes were losing up to three percent of their value yesterday, which became the most considerable reduction registered during the current year. The losses were cut to 1.5 percent by the end of the day, though. Airlines, insurance and traveling companies incurred largest losses, as it usually happens after large scale attacks.

Muscovites, meanwhile, bring flowers to the British embassy situated on one of Moscow's embankments to express their solidarity and sympathy with Londoners, RIA Novosti reports. Muscovites know what terrorism is.