A bizarre incident occurred in the woods of the Khabarovsk region, in Russia's Far East. A large number of trees fell down for an unknown reason on the territory of about three square kilometers, Interfax reports with reference to the press secretary of the EMERCOM department in the Far East. 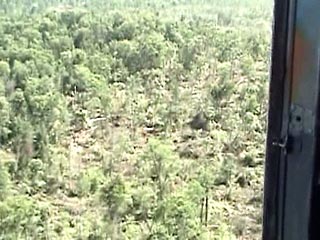 Regional authorities received the information about the fallen trees in the woods on Tuesday. A special group of EMERCOM specialists, ecologists and scientists set off to the site of the incident yesterday.

The specialists examined the anomalous zone and took samples of air, soil, water and wood for laboratory analyses. It was noticed that all the trees had fallen down in one and the same anti-clockwise direction. The trees growing on the top of the hill, which is situated in the anomalous zone, were uprooted, whereas other trees growing closer to the foot of the hill were split or broken.

According to preliminary conclusions, the tree felling occurred as a result of a twister, which was formed on the intersection of cold and warm air masses. Specialists added, however, that twisters are not a typical weather phenomenon in the region. Furthermore, the archives of local meteorological services did not contain any information about the twister.

The analysis showed that the radiation and the chemical backgrounds on the territory of the incident were normal.

Anatoly Savchuk, the chairman of the local logging enterprise, supposed that the strange incident could occur as a result of UFO activities. The trees were felled on the territory in a rather specific order. In addition, the grass was cut too, as if it had been mowed down with a huge scythe.

Eyewitnesses of the phenomenon in the woods of the Khabarovsk region say that the incident reminded mysterious crop circles in the USA, although in Russia it occurred in the woods, not on a farm field. To crown it all, specialists found numerous dead birds there, presumably crows.