South Korea has detected signs North Korea may be preparing to conduct a second nuclear explosion, after a report said U.S. satellites picked up activity at the site of the country's first test last week. 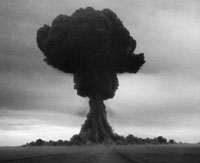 The South Korean government is aware of the indications of activity, a government official who declined to be identified said today by phone in Seoul when asked about the report from Washington by ABC News.

The U.S. government confirmed the explosion was nuclear yesterday and estimated the blast was the equivalent of less than a kiloton of TNT. The explosion took place near the district of P'unggye, also known as Punggyeri, in the northeast of the country, Bloomberg reports.

US Secretary of State Condoleezza Rice, on the eve of a trip to the region to try to stiffen the resolve behind UN sanctions against North Korea, said she hoped Pyongyang would not conduct a second nuclear test.

North Korea's ambassador told the council that if the United States increased pressure on his country, Pyongyang would "continue to take physical countermeasures considering it as a declaration of war".

Rice dismissed scepticism among some in Washington about China 's commitment to tough action against its communist neighbour, the Age says.