One killed in massive fight in Moscow's center 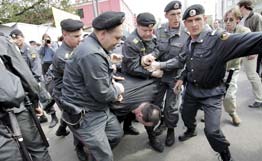 The incident occurred at about 9:20 p.m. Moscow time, in Granatny Side-Street in the city center. It became possible to cease the fight only after special police units arrived to the site.

About 70 men have been arrested for their participation in the massive scuffle.

The fight reportedly occurred as a result of an argument between two companies, whose offices were housed in one of the buildings on Granatny Side-Street. “About 200 people gathered near the building as the dispute between the two companies was gathering steam. The people were wielding iron rods, sticks and baseball beats. Some of the men were wearing masks,” a spokesman for the Moscow law-enforcement authorities told Interfax. The conflict reportedly occurred because of ownership rights for the office building: one firm was supposed to move out, while the other one was going to move in. Discrepancies resulted in a massive fight.