Anton Demin asked to borrow money for his wife’s medical needs after he cut her to pieces and hid them in different parts of Saratov city. After he spent the entire sum of money “unlucky” husband willingly turned himself to the police. 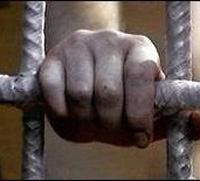 After Katya Demin’s sudden disappearance her friends and family began to suspect that something went wrong. That’s when Anton with looking very concerned began telling everyone that his wife is in the hospital and needs urgent financial help to get better. People simply assumed that the odd nervous behavior of the 24-year-old man was the result of his stress over the occurred misfortune, and so they kept giving him money without asking further questions. The grateful husband would take the hand-outs and disappear right away.

Anton had managed to visit quite a few people. Katya was a very social and friendly being and the circle of her family and friends was very wide. The amount of money Anton requested from them varied between 1 and 7 thousand rubles. If anyone insisted on finding out where exactly his wife was receiving medical attention, Anton would say that no one is allowed to see her after the operation and so attempting a visit would be pointless.

Among those Anton harassed for money were his own parents. They were taking care of their granddaughter Lilechka at that time. Anton’s father later recalled that he noticed suspicious behavior from the beginning but could not find anything confirming his anxiety. “My son used to have a serious problem with drugs before,” said his father, “But then he received help and it seemed that he overcame his damn dependency. After Anton came asking for money I went to their apartment myself but didn’t discover anything unusual.”

Finally Anton’s deception became too burdensome even for him. He couldn’t come up with any further excuses and wrote an explanatory letter and pleaded guilty, confessing the murder of his wife, the mother of his child, reports “ Saratov ’s Arbat.”

Three weeks were required in order to collect what remained of the once beautiful young woman. Anton contradicted himself in the testimony but explained that he was in state of altered consciousness, that he was drinking heavily to escape reality and that he hardly remembers his own actions.

To begin with a part of woman’s body in pretty lingerie was discovered in the basement of the apartment complex where Demin’s family lived. A few days later a plastic bag containing a head and a pair of hands was found under a pile of concrete blocks on the Technicheskaya street. Her legs were found under a similar pile of rubble in Delovoy alley. During the questioning Anton told the judges that he placed the body in the bathroom after the murder. When a few a days later the smell became unbearable he decided to get rid of the evidence.

No one could understand such unspeakable cruelty towards the woman he loved. Anton began dating Katya when she was 14. They went to the same school together but he was he was two grades above her. They got married 5 years later. Both of them came from normal healthy families far removed from the marginal criminal circles.

Some of the people said that Katya’s parents were not happy with their daughter’s choice. He didn’t have a permanent job and appeared unreliable. Plus the rumors about drugs. But they could not influence their daughter because since her wedding the young woman maintained very little contact with them.

Apparently even Katya became disappointed with her family life after a while. She was goal-oriented, independent and confident as opposed to her husband. The only information about their last morning together could be gathered from Anton’s confession: Around 7am Katya was ready to leave for work and woke him up to tell him that a faucet was broken in the bathroom.

“I grabbed the tools and got up to go fix it,” - Anton tells, - “While I was struggling with it Katya began saying that I can’t do anything well, that I am bad husband and that I don’t bring home any money. I felt as if an electric shock ran through my body: I grabbed the hammer, turned to her and hit her on the head with it.” Anton must have done that many times because his wife’s head was turned into a bloody mash. He then put the body in the bathrrom and began gathering money for Katya’s doctors.

Two people were leading the case: Olga Frolova, first officer of Lenin region’s prosecutor, and Roman Georgitsa, the prosecutor’s deputy. According to them, by looking at the young man it was impossible to suppose that he committed such a terrible crime.

On July 11 Alexei Vetchinin, the judge of the Lenin region’s city court, declared Anton guilty and verdict placed him behind bars for ten years. The verdict was softened because of Anton had turned himself in voluntarily and because he had a small daughter.