Several passengers were grinded in the moving mechanisms of the escalator 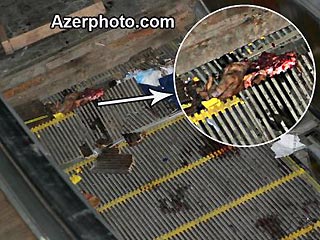 Dozens of people were injured in the state of emergency, which occurred in the metro of the city of Baku, the capital of the republic of Azerbaijan. An escalator full of passengers collapsed at one of the central metro stations of the city, Azeri TV channel ANS reports. About 30 people were wounded in the accident, ANS said with reference to eyewitnesses. ER vehicles arrived to the site immediately, metro station was closed. Eyewitnesses said that they could see severed limbs on the stairs of the escalator.

According to senior engineer of the Baku metro, Elbrus Muradov, the accident occurred when one of the passengers started descending a still escalator, which was under repair. Other passengers followed the man's example, the escalator did not bear the people's weight and the stairs started moving spontaneously. The passengers could not balance on the stairs and fell down, when the escalator increased the speed and eventually tumbled down. Eight people were severely injured in the accident – seven men and one woman. 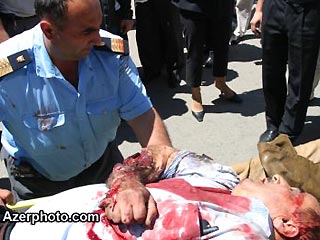 ”Five victims of the metro accident have been hospitalized in severe condition. Two people lost their limbs in the breakdown,” Musa Nagiyev, a doctor of the Baku emergency hospital said.

The tragic accident took place today in the afternoon, at about 4:00 p.m. When the moving stairway collapsed, several people were seriously injured in the mechanisms of the escalator, Itar-Tass reports.

Senior engineer of the Baku metro, Elbrus Muradov, has already claimed his responsibility for the accident. However, Muradov did not exclude the passengers' fault in the accident over the violation of the metro traffic rules.