Such was the conclusion reached in the U.S. Russian generals and political scientists disagree only about its exact starting date. 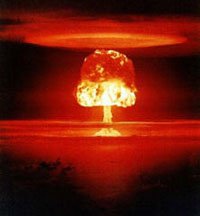 Our world is on the brink of another world war. It will originate August 22nd in the Middle East. The prediction was presented not by Vagna or Nostradamus but by an American political scientist Bernard Lewis in the acclaimed publication of Wall Street Journal. He is a man with close ties to the Bush administration as well as to the non-conservatives pushing for the radical solution of the “Iranian Threat.”

Lewis believes it will be precisely Teheran who will unleash the ultimate conflict by attacking Israel. Why August 22nd? Perhaps simply because Washington has set a deadline for the Iranian president Mahmoud Ahmadinejad and has demanded a complete wrap up of the nuclear program by that day. It is obvious that Teheran has no intention to comply. Curiously, this year the night of August 22nd happens to be night Muslims will celebrate the journey of their prophet Mohammed to Jerusalem and his ascension into heaven. According to Lewis the followers of Mohammed have a perfect opportunity to enrich their celebration by throwing an attack on Israel. An immediate retaliation will follow.

“Such a scenario does not seem too unrealistic to me,” comments Sergey Markov, a Russian political scientist, “These days anything is possible in the Middle East. People living there are crazy and they constantly keep playing with fire. Their situation has gone out of control and is ready to explode any minute. In fact, the new world war is already going in that place.”

As the Israeli invasion of Lebanon continues it is becoming clearer that Tel-Aviv actually aims at much more than the elimination of Hezbollah. Israel could have long since used its omnipresent scouts to put an end to the resistance’s activity. Neither does the complete destruction of all Hezbollah’s rocket-launching sites present a problem for the Israeli army with its tremendous equipment and might.

So why the endless bombing of Lebanese cities and villages? And why the overwhelming U.S. support? All this is happening precisely during the time when Americans seem unable to force Iran to comply with their demands. Lebanese occupation under the excuse of defending against Hezbollah is itself an excuse for solving the Iranian problem.

Israel has already achieved the minimum solution by getting rid of “Hezbollah” across the border. What more do they need? UN has already offered to fill the occupied area with troops and peace-keepers but Tel-Aviv has still not given its consent. The U.S. is not in hurry to give the green light either. In all actuality it looks like the two countries are intentionally waiting until Iran gets involved in the conflict. The expecting parties might anticipate the attack in the face of fired Iranianrockets, which Tel-Aviv will intercept as they had often done previously with the rockets from Iraq. This time, however, Washington and Tel-Aviv will have acquired an official right to retaliate against Iran.

Israel will attack Iranian nuclear sites. The U.S. will provide its support through the Navy in the Persian Gulf and perhaps through the Air Force. Iran will not delay with its own full-scale attack against the Israeli sites and the U.S. ships.

At this point no one can guarantee that the rest of the Arab World is going to remain watching as an innocent and uninvolved bystander.

Very soon such participants as Turkey will inevitably get dragged into the funnel of war. In Iraq and Afghanistan anti-government militant groups will become very active. Finally the conflict will focus on the fighting for the control over the territories with major oil resources. That is exactly with the U.S. is after.

The eventual possession of the oil treasury by one of the conflicting sides will provoke harsh resistance from both Asia and Europe. Russia is also very likely to get provoked into becoming an active participant. In the end this might become the Ultimate Fifth Act, in which no one wishes to believe…

- The pulling of the trigger leading to the tragic chain of events has been done. Syria and Iran will be pulled into the war right after Lebanon. Israeli and American attacks on Iran will lead to the interruption of oil exports into Europe and China. Their economies will suffer. In the conclusion there will be chaos all across Asia.

The detonation device for the new apocalypse has been set off by Americans, obviously. They believe that they have the power and the authority to regulate the world’s chaos. But the U.S. cannot even gain control over its own minor chaos in Latin America. Let us only hope that Russia will remain neutral throughout this universal nightmare.

Alexander Vladimirov, major general and vice-president of the Board of Military Experts of Russia:“Collision of Civilizations”

- This war is utterly futile for either one of the sides. And as the one lacking in logic it is all the more dangerous. The most dangerous aspect lies in the fact that Israel (and perhaps even Iran by now) possess nuclear weapons and are able to put them to use. This means the beginning of the global war because other countries will not be able to remain uninvolved in the collision of civilizations of this magnitude.