Another suspect appears on murder case of Forbes Russia's editor

Another person has appeared in the case of Paul Klebnikov, editor of Forbes Russia, who was killed in July of 2004 in Moscow. The Office of the Prosecutor General arrested a Moscow notary, Fail Sadretdinov, at the end of the last week. Sadretdinov became the third person, who was arrested during the investigation of the notorious crime. Russian special services originally detained two suspects of Chechen nationality that were believed to be the virtual assassins. 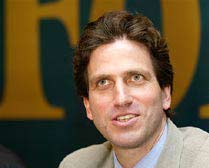 The Office of the Prosecutor General has not released any details regarding the fact of the notary's arrest. Sadretdinov's lawyer said that his client had nothing to do with the assassination of the American journalist. As it turned out, Mr. Fail Sadretdinov was arrested on May 24th. The notary was summoned to appear at the Office of the Prosecutor General as a witness, although he was later arrested there instead of being interrogated. It is noteworthy that it was not the first time when Mr. Sadretdinov testified on Klebnikov's case.

The lawyer of the new suspect has not been able to clarify any points on the matter. He only said that the client was by no means connected either with the previously arrested Chechen citizens or with Paul Klebnikov himself.

Fail Sadretdinov specializes on cases of legacy and has never been implicated in any criminal incidents before, the notary's colleagues said. Russian special services believe, however, that the notary was supposedly connected with the assassins.

Paul Klebnikov was killed in the evening of 9 July 2004 when he was leaving the building of Forbes Russia in Moscow. The department for the investigation of extremely important cases of the Russian Office of the Prosecutor General started the investigation immediately. It became known in September of 2004 that special services arrested two natives of Chechnya, from whom they withdrew three guns. The American journalist was supposedly killed from one of those guns, a spokesman for Moscow's Internal Affairs Administration said. The investigation continues.

On the photo: Paul Klebnikov