US Secretary of State, Condoleezza Rice, stated that the US administration was deeply concerned about the situation from Uzbekistan

Foreign diplomats and journalists were finally allowed to visit the rebellious Uzbek town of Andijan yesterday. About 40 representatives of Uzbek and foreign media outlets, as well as ambassadors of many states, accredited in Uzbekistan, arrived in Andijan from the republic's capital, Tashkent, on the plane provided by Uzbek President Islam Karimov. 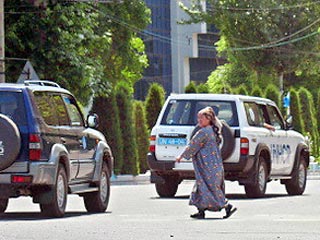 Zakir Almatov, the Uzbek Minister for Internal Affairs, was accompanying the guests on their trip to the town. “They guided the journalists through the meticulously selected former hotspots of the city so that they could see the consequences of the Andijan uprising,” DW reporter Yury Chernogayev said.

The views of the town that journalists and diplomats saw hardly bore any resemblance to the events of May 13th. It seemed that it was just a usual town, in which shops, cafes, and markets were working as if nothing happened. Burnt buildings of the cinema and the regional administration, armored vehicles and numerous armed police officers in the streets undermined the perfect image of the town's landscape, though.

Local authorities removed shell holes on the asphalt road near the Andijan prison, where the anti-governmental uprising started in the republic. Minister Almatov did not take the guests to the town's parks and gardens, in which local residents were burying dead bodies after the massacre organized by governmental troops. The minister simply stated that there were no such burial grounds in the town: it is traditionally forbidden to bury Muslims anywhere but on cemeteries.

The uprising in Uzbekistan - Photo gallery

Journalists and diplomats had an opportunity to talk to Andijan residents, though. President Karimov promised at a press conference in Tashkent that reporters and diplomats would be able to interview eyewitnesses of the events. According to Karimov, there were no victims among the civilians in the uprising at all. “I emphasize that there were only terrorists killed during the operation. There were guns lying next to their dead bodies,” the president of Uzbekistan stated. The official information says that there were 170 people killed in Andijan during the operation to suppress the armed mutiny.

The communication with Andijan residents was extremely disappointing, reporters said. There were only two local residents provided for the interviews: one of them was a former hostage of the rebels, and the other one was the father of a killed policeman. The two “local residents” honestly fulfilled their mission and hastily delivered the text, which they had apparently learnt by heart before.

The Uzbek internal affairs minister was willing to talk about those, who organized the mutiny. Zakir Almatov said that Uzbek special services intercepted negotiations between members of the criminal group, which started the uprising. The minister said that the terrorists supposedly discussed every detailed of the atrocious attack. Almatov added, though, that Uzbek troops failed to prevent the mutiny because it came out of the blue, when nobody was expecting it.

Meanwhile, US special services reportedly intercepted another radio conversation between commanders of Uzbek governmental troops that took part in the suppression of the Andijan revolt. Details of their commands were more than just terrifying. If it is really so, news reports about hundreds of civilians killed in the town do not seem to be exaggerating, a member of the foreign delegation in Uzbekistan said.

It is noteworthy that a source close to Uzbek military structures told a Nezavisimaya Gazeta correspondent that the Russian administration evinced great interest in those recordings of the American special services.

US Secretary of State, Condoleezza Rice, has recently released a special statement about the events in the former Soviet republic of Uzbekistan. Ms. Rice said at a press conference in Washington that the US administration was concerned about the death of innocent people in Andijan.

Unlike Washington, which is seemingly trying to show pressure on the Uzbek administration, China totally approves President Karimov's position on the matter. An official spokesman for the Chinese Foreign Affairs Ministry said that Beijing strongly supported Islam Karimov's efforts to guarantee security in Uzbekistan. Beijing has had an experience of dealing with Islamite organizations on its territory before. Chinese officials believe that Washington's pressure on Uzbek President Karimov was potentially dangerous both for China and Central Asia states. Certain observers believe that statements from the US administration make Beijing become a champion of authoritarian regimes in Muslim states. It is not ruled out that China might eventually find itself involved in the confrontation with the Islamic world.