Husband sets his wife on fire, because she is an alcoholic

The woman lost her eyesight and suffered massive burns on her face, neck, arms and back

The following tragedy happened in an average family. The family of Sergei and Svetlana looked pretty normal. They fell out only when Svetlana was drinking too much. And the last time she ever got drunk was at their daughter's birthday party held at grandmother's place. 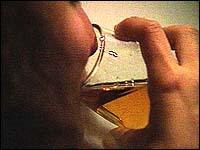 Svetlana drank into a stupor that night so Sergei had to carry her home. Then she fell asleep sitting on a toilet. Sergei went wild and brought his wife into a bathroom, put her into a tub and then poured some highly flammable antifreeze liquid over her back. Then he poured some more.

His anger subsided and he retreated to the kitchen for a smoke. Svetlana climbed out of the tub and staggered along to join him. They were apparently arguing over something when Sergei clicked his lighter. Moments later the woman was up in flames. She was screaming madly as Sergei carried her back into the bathroom and turned on the shower. It took him sometime to put off the flames since her clothing was generously soaked in that liquid. Sergei called the ambulance. Svetlana and Sergei told the doctors that the accident was caused by the explosion of a faulty hot-water heater.

The doctors doubted their explanation. A few minutes later Svetlana felt an excruciating pain all over her body. She had massive burns on her face, neck, arms and her back. She lost her eyesight. Her condition deteriorated and she died in hospital a few days later. The police launched an investigation. Svetlana's mother was begging the judges for mercy during the court sessions. She did not want them to put the defendant to jail because he had his daughter and elderly mother to look after. Notwithstanding all the above circumstances, the court sentenced him to 5-year imprisonment in a maximum security correctional facility.