Russia's military attache in Nicaragua, Colonel Anatoli Belyaev, was killed in a car accident in a suburb of Managua. The tragedy occurred on Monday night, when the car of the Russian military diplomat lost the control making a turn on a dark mountainous road and fell off the cliff into the abyss from the height of about 80 meters. 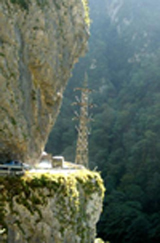 The diplomat's wife, Lyudmila Belyaev, who was also in the car with the diplomat, miraculously survived the fall. The woman even managed to use her cellular phone and call the ambulance despite the psychological shock that she had experienced. She was allowed to leave hospital already on Monday afternoon, after a medical examination.

The Russian ambassador to Nicaragua, Igor Dyakonov, told Itar-Tass news agency on the telephone that the police was currently investigating the reasons of the car accident, in which a Russian military diplomat had been killed. Spokespeople for Nicaraguan authorities are expected to release an official statement on the matter on Thursday.

”Anatoli Belyaev was a talented military diplomat. He was a worthy representative of the Russian armed forces in the region. He has managed to accomplish a lot to strengthen friendly relations with the armed forces of Central America. It is a big loss for our staff,” Ambassador Igor Dyakonov said.