Newborn was dying as doctors were busy partying 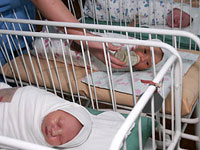 The infant's parents blame the doctors while the doctors say there was nothing they could do to save the child. The parents asked the police to look into the case.

Marina, the mother of the baby boy, claims that it was the death by negligence. According to her, the doctors simply told her that the baby was safe and sound when he was born, no additional tests were done by the doctors. The child began to suffocate on a second day of his life, his mother says she could not locate a duty doctor in the ward. The whole Russia seemed to be celebrating Russian Easter and the 1st of May in those days.

Marina was taken to hospital's maternity ward on April 29th, the delivery took place later that day. The newborn's weight was about 3.5 kilos. Apart from her hapless son, 18 more infants were born on the same day, they are said to be all right. The doctors say that Marina's child died from lung and liver failure due to a congenital heart disease. They say the latest case is not unique in terms of statistics. Three more newborns died in maternity ward due to congenital heart diseases in the last two months.