Russia's former Nuclear Power Minister, Yevgeny Adamov, has been recently arrested in Switzerland on the allegation of fraud and money laundering. Adamov's lawyers said that the official would be extradited to the USA, where a criminal file had been filed against the Russian official. 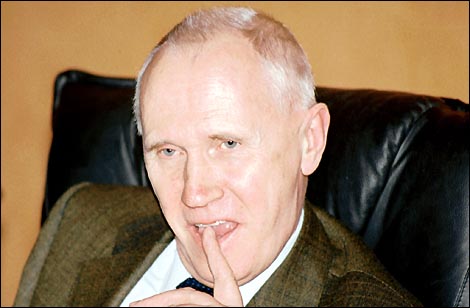 The details of Mr. Adamov's case are not known yet. Yevgeny Adamov was arrested in Bern according to the requirement from US authorities on May 2nd, where he was supposed to settle the question of freezing his daughter's accounts. Details of the matter with bank accounts have not been clarified.

The criminal file against the former Russian minister was filed in Pittsburg: Yevgeny Adamov is a co-owner of a company, which was registered there. According to the scandalous amendment of the anti-corruption struggle of the Russian State Duma, Mr. Adamov also owns a $200,000 house in Pittsburg. No visitors, but lawyers, are currently allowed to the arrested Russian official.

The former Russian minister is suspected of embezzling nine million dollars, which the US Energy Department assigned to improve Russia's nuclear security. According to certain sources, the claims touch upon the contracts, which Mr. Adamov concluded when he chaired Russia's Dollezhal Research Institute in the beginning of the 1990s. Adamov's lawyers stressed out that the case pending does not touch upon Yevgeny Adamov's activity on the position of the nuclear power minister.

Adamov's Russian lawyer, Timofei Gridnev, has a different opinion on the matter. According to Mr. Gridnev, the US government did not assign the above-mentioned funds to Russia. The money, the lawyer believes, was allocated to American companies, which asked Russian institutes to conduct research works in the field of nuclear power. “US companies received the results of the works and did not set any claims against Russian institutes,” the lawyer emphasized.

Valery Yazev, the head of the energy, transport and communications committee of the Russian parliament, believes that Russian authorities must do their best to return the former head of the Russian Nuclear Power to Russia. It is noteworthy that the Russian society does not have a universal approach to the incident with Yevgeny Adamov yet. Mikhail Grishankov, deputy chairman of the security committee of the State Duma, believes that the official has been arrested on account of his business activities in the USA, probably.

It is not ruled out that the filed case is connected with the company Energo Pool, Inc., which was established in Moscow in 1996. The enterprise was organized to deepen cooperation between Russian and American scientists to solve the global goal of providing security to mankind. Yevgeny Adamov became the executive director of the company, which was registered in Monroeville, Pennsylvania. Documents say that the firm liquidated itself on March 23rd, 1993.
Yevgeny Adamov later became the president of another company, Omeka, which was also registered in the above-mentioned town.

Omeka Ltd's funds made up more than five million dollars as of the end of 1999. Mr. Adamov owned over three million of them. Yevgeny Adamov opened an account in Switzerland, where his daughter was living and studying, and acquired a house for $250,000 at the expense of the company Omeka. The corporation also paid for Adamov's house in Pittsburg - $200,000. Omeka currently has several contracts with the department for foreign links of the Russian Nuclear Power Ministry and the ministry's department for technical supplies. The company receives $7,500 monthly for consulting services within the scope of the contracts.

The first hearings on Yevgeny Adamov's case started in Switzerland yesterday. The outcome of the court session is not known yet. Certain observers believe that the case has a hidden political motive. The US government accused Russia's Dollezhal Research Institute of handing over nuclear technologies to Iran in violation of international restrictions. Yevgeny Adamov was the director of the institute at the moment, when the incident occurred.

It is not ruled out that American authorities will bring down new charges against the former Russian minister after his extradition.

On the photo: Yevgeny Adamov