A car crash can make for the Guinness Book of Records 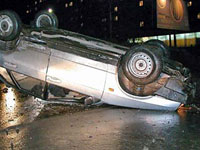 An unusual car crash has recently happened in Grozny, the capital of Chechnya.

A Russian-made VAZ-21099 (also named Lada) hit a 70cm high concrete fence of a roofless underpass while moving at a maximum speed downhill. The impact sent the vehicle flipping in the air, it flew down 12 m and finally landed onto the concrete floor of the underpass.

The driver of the vehicle is reported to have got off lightly with a few scratches and bruises, according to the Center of Emergency Medicine and the Interior Ministry of Chechnya. The traffic police used a crane for removing the vehicle from the underpass.

Five vehicles ran into the same "pitfall" in the past. Victims were reported in all five accidents. The city residents have stopped using the underpass since the beginning of hostilities due to the threat of a bomb attack, Interfax reported.

Eyewitnesses say no stuntman could have done anything similar to that breathtaking flight of the Lada. The authorities in Grozny say that they might submit the details of the accident to the Russian Book of Records for consideration of a record broke by a nonprofessional driver.