The Russian embassy in Iraq has no information about the fate and whereabouts of the Russian citizens captured in Baghdad. The embassy cooperates with local authorities, coalition forces and political parties in Iraq, but it has not been possible to collect any information about the hostages yet. The embassy is working with Iraqi security forces and other departments to find and release the Russian citizens. 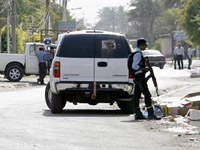 Four Russian diplomats have been kidnapped in Baghdad on Saturday; another officer of the Russian embassy has been killed. Experts believe that the assault has been meticulously planned. A group of Russian diplomats were traveling in a Chevrolet Suburban vehicle. They stopped the car only 400 meters far from the embassy to buy some groceries. A group of armed assaulters blocked the vehicle on the road and opened automatic fire. The next minute the attackers seized four passengers of the Chevrolet vehicle – all of them Russian embassy employees – pushed them into the minibus and took the hostages in an unknown direction. Security guard Vitaly Titov was seriously wounded during the attack, although the kidnappers left him on the scene. Titov was alive when other employees of the Russian embassy rushed to help their colleagues. The man died on the way to the hospital.

Several news agencies reported on Saturday night that the Russian hostages had been freed as a result of a special operation conducted by US and Iraqi troops. The Internal Affairs Ministry of Iraq rejected the information later.

None of the Iraqi terrorist groups have claimed responsibility for the attack against Russian citizens yet. Special services believe that the terrorists kidnapped the Russian diplomats with a view to hold them to ransom. The majority of hostage-taking incidents in Iraq have occurred because of the financial reason so far. Over 200 foreigners and 1,000 Iraqi people have been kidnapped in the war-torn country after the collapse of Saddam Hussein’s regime. However, the kidnappers have not released any statements yet, although they usually ask for money during 24 hours after the crime. Furthermore, Iraqi kidnappers prefer to attack European nationals or those coming from wealthy countries of the Persian Gulf. Russia does not fit in these two categories. That is why, special services believe, the kidnappers could have other motives for their attack.

Some specialists believe that the attack against Russian diplomats in Baghdad could be good for Washington. The US administration is particularly concerned about the Moscow-run politics in Iraq (which contradicts to Washington’s goals) and the activities of Russian special services in Iraq. To crown it all, the Bush’s administration dislikes the image of “a friend of Iraq” which Russia propagandizes.

Former Iraqi Ambassador to Russia Abbas Halaf stated that the attack against the Russian diplomats had been instigated by US troops in Iraq. The official believes that the USA tries to punish Russia for its political activities in the region, especially in Iraq. It is worthy of note that US soldiers attacked a column of Russian diplomats and wounded five of them in April of 2003.