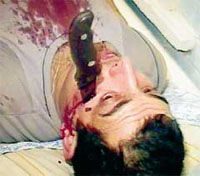 A hospital nurse of the Russian village of Zaton heard someone knocking on her door late at night. When the woman opened the door, she could not say a word: her neighbor, Arthur Javanyan, was standing in the doorway. There was a knife sticking out of the young man's head: the blade was plunged in the skull almost entirely. The nurse called an ambulance immediately.

An hour later the young man was lying on the operating table with a group of surgeons around.

”It was an absolutely extraordinary incident. The extraction of the knife from the man's head could result in abundant bleeding, but we could not hesitate or keep on thinking of all variants that we could use for the operation. The blade of the knife was ten centimeters deep underneath the eye. It pierced through the zygomatic bone and rested against the back of the maxillary sinus. Such a wound posed a real threat for purulent maxillary sinusitis to develop,” chief surgeon of the local hospital, Viktor Tolstenko said.

It took about 40 minutes for the unique operation to last. When everything was over, doctors said that Arthur had been born under a lucky star. “If the 35-centimeter long knife had gone right in the eye and damaged facial nerves, it would have led to lamentable consequences. All that Arthur has now is just a little scar on his cheek,” Dr. Tolstenko.

The horrible incident happened at night, when Arthur was sleeping. The day before Arthur had a meeting with a friend of his, whom he had not seen for several years. Arthur invited him to his house and the men had a little alcohol. As the men were talking, Arthur's friend started complaining of bad life and never-ending troubles. Arthur told the guest not to hurry and work harder for things. The friend apparently did not like the advice, and the conversation took the form of a squabble.

Arthur cleaned the table and went to bed. An hour later he woke up because of  terrible pain.

”At first I could not understand anything. I turned the light on, came up to the mirror and my jaw dropped with horror. I rushed to see where my friend was, but he was not in my apartment,” Arthur said.

The young man is not going to file a police report against his treacherous friend. He said that he would settle scores with him later.