Garry Kasparov suffered a serious haematoma, but he did not ask doctors for help

Needless to say that politics is a dirty and dangerous business. The world chess champion, Garry Kasparov, has recently experienced the well-known saying in practical usage. Kasparov, who currently chairs the Committee-2008: Freedom of Choice, was attacked in public last Friday, when a young man hit the chess player over his head with a chess-board. 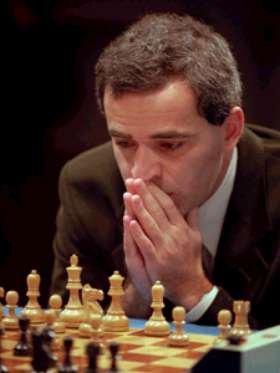 The incident occurred during the meeting of the retired chess champion with activists from youth organizations. When the meeting was over, a young man came up to Garry Kasparov and asked the grandmaster to autograph a chessboard for him. When Kasparov was finished with the autograph, the young man hit the world champion over the head with that same chessboard. The assaulter shouted: “I loved you as a chess player, but you left to take up politics.” When the man attempted to strike Kasparov again, the security seized the attacker's hands and took him out of the room.

Garry Kasparov suffered a serious haematoma, but he did not ask doctors for help. It is noteworthy that instead of helping Kasparov, youth activists hurried to pick up chess pieces, which fell out from the unfortunate chessboard during the fierce attack.

It is still not clear, who decided to attack the retired world chess champion and what the point of the incident was. It is not ruled out, though, that members of the National Bolshevik Party (NBP) could be affiliated with the assault. The press secretary of the youth movement “Nashi” (“Ours”), Ivan Mostovich, said in an interview with the Echo of Moscow radio station that the attack was in the NBP's style. “It looks very much like National Bolsheviks. The blow over Garry Kasparov's head with a chessboard and the throwing of bottles of mineral water during our conferences – these are the links of one single hooligan chain. Such methods are typical for fascist-oriented NBP chairman, Eduard Limonov, and his followers,” Mostovich said.

A spokesperson for the Moscow Office of the Public Prosecutor said that the victim of the attack had not filed a statement. “The National Bolshevik Party was obviously not involved in the incident. Most likely, it was someone from Kasparov's milieu, who carried out the attack,” an anonymous source from the Office of the Public Prosecutor said. A previously planned PR technique to attract attention to Garry Kasparov's persona is not excluded either, though.

Such public actions of protest are very typical for NBP activists indeed. On the other hand, the NPB and the Committee-2008, which Garry Kasparov chairs, have common financial sources. Garry Kasparov has recently retired from the professional chess playing and took up politics to criticize Russian President Vladimir Putin.