Kyrgyzstan, which has been recently shocked with a national revolution, is currently dealing with a danger of a serious ecological disaster. A massive landslide has recently occurred near the town of Mailu-Suu, in the area, where spent nuclear fuel depositories are situated. Huge layers of soil blocked a mountainous river, which made the water in the river flow on the territory of the factory. According to experts' estimates, the volume of the landslide made up 300,000 cubic meters. Specialists of the republic's EMERCOM do not approach the disastrous area over the threat of another possible landslide. 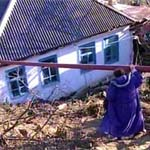 The enterprise, on the territory of which spent fuel depositories are located, is not functioning. The landslide took place on the area, where over 20 depositories of the uranium production are situated. The deposits have not been repaired for more than a decade already because of the lack of funds in the budget of Kyrgyzstan. Ecologists believe that the destruction of only one deposit near Mailu-Suu may result in an ecological disaster that will hit not only Kyrgyzstan alone, but the entire territory of Middle Asia.

The IL-76 cargo plane loaded with humanitarian help for Kyrgyz citizens landed in Bishkek, the Kyrgyz capital, two days ago. “There are two mobile electric power stations and 60 tents amid other items of the humanitarian cargo,” a spokesman for the Russian EMERCOM said. It has become the second special flight of the department to Kyrgyzstan. Mobile electric stations and tents have been delivered for local rescuing services that need such equipment because of frequent landslides in the republic. Rescuers often have to resettle local residents from disastrous territories. The Russian EMERCOM has already rendered humanitarian assistance to Kyrgyzstan before, when the republic suffered from massive landslides in summers of 2003 and 2004.