A bomb went off during the V-Day festivities on the crowded street of the town of Kaspiisk, Dagestan, on May 9th, 2002

Major terrorist attacks have overshadowed the V-Day celebrations in Russia in the last few years. Those attacks claimed lives of many people and caused political aggravations. 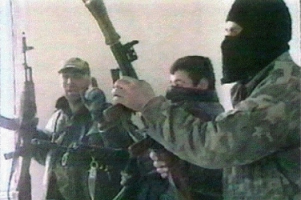 According to reports based on information obtained from captured terrorists and statements released by Russian security agencies, the Chechen terrorists are planning to launch attacks during the celebration of 60th anniversary of the Victory Day to be held on May 9th, 2005. Their leaders are undoubtedly placing special emphasis on a ideological effect that could be produced by attacks launched specifically on May the 9th. Many world leaders are expected to attend the festivities in Moscow. In this context the threat of a terrorist attack looks particularly ominous.

Some Western leaders may cancel their trips to Moscow due to the threat. The development may disrupt the plans of the Russian leadership to make the most of the V-Day celebrations in terms of the grandeur and importance of Russia to the international community. By and large, the plot of Basayev (he is most likely to be behind potential attacks, according to some reports in the media) is not only a deadly threat to the innocent people, it also fits quite well in the speculations of some foreign politicians who are trying to disparage the importance of the great victory.

According to Russian security agencies, terrorists are planning to strike primarily in Chechnya. But nobody is in a position to rule out the possibility of attacks in Moscow and other Russian cities. For nearly two months the Russian army and security personnel have conducted preventive anti-terrorist operations in Chechnya and neighboring areas. They raided a few hideouts and arrested a number of criminals. They also managed to track down and killed a few leaders of illegal armed groups including the now-deceased President of Chechnya (Ichkeria), Aslan Maskhadov.

However, some experts believe that the latest successful operations of the Russian military in Chechnya could trigger off Basayev's fresh attacks. The most notorious Chechen terrorist has recently lost two of his closest henchmen, namely Rizvan Chitigov and Alvi Tasuyev.

According to media reports, Basayev promised to avenge the death of his comrades. He also made repeated statements following the killing of Maskhadov. He said that Maskhadov's demise “got his hands untied.” The members of his unit that were recently captured by the Russian security services confirmed that Basaev was planning new attacks.

These days the Russian law enforcement agencies and the army are conducting a new series of anti-terrorist preventive operations aimed at locating bandits' hiding places and caches of weapons and explosives. Three caches were already found and destroyed. The caches contained powerful explosive devices and a makeshift rocket launcher for firing unguided air-to-surface rockets.

The terrorist equipment found in the caches is yet another sign of the terrorists' readiness to launch a high-publicity attack that would send waves of fear across Chechnya and Russia one more time. It would also remind the Russian authorities and the international community that the terrorists are fully capable to carry on with their fighting. Some politicians and commentators already brought attention to the threat of terror regarding the V-Day celebrations. However, the media and politicians should not build up tension too much, according to Lt.Gen. Arkady Baskayev, member of the security committee of the State Duma. “The latest developments in Russia, Chechnya and in the southern regions of the country show some positive results of the measures taken by the Federal Security Service, Interior Ministry, and other security agencies,” says he.

No doubt the police and security services will be on the alert and will make every effort to prevent terrorist attacks during the festivities. Let us be hopeful that security arrangements will be adequate. In the last few years the terrorists have repeatedly proven their abilities to surprise the authorities by striking the most vulnerable targets.