A political and diplomatic scandal has recently occurred in Montenegro. Russian Consul to Podgorica, Vladimir Vaniev, said that Montenegro was the 51st state of the USA. In addition, the Russian consul accused local media outlets of publishing articles, which spokespeople for the US administration tells them to write. 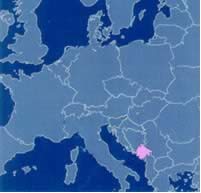 The statement from the Russian consul was compared to the resolution from the Committee for Information of the Soviet Union, issued in 1948. The resolution became the document, which aggravated the relations between the USSR and Yugoslavia for many years. Montenegrin officials believe that the Russian consul's statement might cause damage to Russia's interests in Montenegro.

The scandalous story took place after the publication of a small article in the Pobeda newspaper. The author of the article wrote that the former US ambassador, Richard Sklyar, the advisor of the Montenegrin government for privatization, took part in the session of the Cabinet of Ministers of Montenegro. The session was devoted to privatization issues. Vladimir Vaniev, who has recently took the office of the Russian Consul General to Montenegro, was apparently infuriated when he finished reading the story in the above-mentioned paper. The diplomat called the office of the newspaper and expressed his deep indignation to one of the managers. Mr. Vaniev said that he wanted to meet the journalist, who wrote the article.

The journalist did not come to the meeting with the Russian official. In return, Vladimir Vaniev called the opposition newspaper Dan and suggested an interview, in which he accused “several media outlets of Montenegro” of receiving funds from the US government to conduct the anti-Russian campaign for privatization issues. “I do not know the exact amount that the media received, but I do know that they were paid in dollars,” the consul said.

The diplomat was obviously offended with the fact that the author of the unfortunate article had not arrived for the meeting: “I am not the last and not the smallest person to be ignored by some reporter,” said he.

The Russian consul came to his conclusion about the USA's anti-Russian activities on account of Richard Sklyar's participation in the talks between a Russian firm and the government of Montenegro. The talks were devoted to the sale of several enterprises in Podgorica. “I do not understand, on which grounds the former American ambassador, Richard Sklyar, was giving pieces of advice to spokespeople for the Montenegrin government regarding privatization issues, and why he interfered in relations between Russia and Montenegro. It won't be left as it is, without Russia's response,” the consul said. In addition, the diplomat stated he did not know that Montenegro was the 51st state of the USA: “If it is true, I must report the Russian Foreign Minister about it immediately,” Mr. Vaniev stated scathingly.