Serviceman poisons 33 soldiers because of hazing

The court martial of the Belogorsky Garrison of the Amur region of Russia found soldier Vitali Smirnov guilty of poisoning 33 servicemen yesterday. The soldier was sentenced to seven years in a correctional institution. 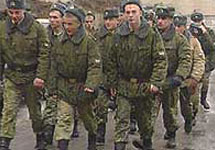 The terrifying story took place last May in the unit of a local military airport. Soldiers suddenly started complaining of bad state of healthy and weakness in the legs. The soldiers were sent to the medical unit of the garrison at first and then taken to the military hospital in the city of Khabarovsk, the Far East. Doctors left most seriously infected patients in Khabarovsk and sent others to St.Petersburg. As it turned out later, the soldiers had been poisoned with thallium nitrate.

The substance poisoned 33 soldiers. Nineteen-year-old Ivan Mankosh died from poison, the health of six other servicemen was considerably damaged. The servicemen, whose state of health was characterized as severe, were subsequently demobilized for their disablement.

Investigators found the initiator of the incident – soldier Vitali Smirnov, a resident of Tatarstan. The soldier supposedly decided to take revenge against his fellow-servicemen, who were humiliating him and stealing his money from him. Smirnov added thallium nitrate to sugar that the torturers subsequently put in their tea. Other servicemen, including recruits and even Smirnov himself, suffered from the poison too. Vitali Smirnov confessed his guilt during interrogation.

The trial against Vitali Smirnov started in Russia's Amur region in the beginning of March 2005. Investigators determined that all the poisoned soldiers were drinking either tea or water from one and the same mugs. Another soldier, Aleksei Rozevikov, was hospitalized with food poisoning after the incident too. “When I returned from my vacation in the middle of June, I drank some water from one of those mugs, I think. I was hospitalized together with other soldiers, who had suffered from thallium poisoning too. I could not recognize them: they grew thin, lost their hair, they could not even walk,” the soldier said in the courtroom.

It is noteworthy that thallium was stored in one of the warehouses of the military unit, in which the massive poisoning occurred. All the servicemen said that they had never seen the poison. The prosecutor asked the soldiers, if they were trying to smoke the poisonous powder with marijuana, which investigators found in the barracks. Law-enforcement officers believed at first that the soldiers had been poisoned with thallium that they added to marijuana. There was certain evidence found to prove the supposition. All the victims, however, said that they never either smoked marijuana or found any drugs in the unit.

Defendant Vitali Smirnov told the court that he had not poisoned anyone. Smirnov refuted testimony that he had given during the preliminary investigation process. It is noteworthy that some of Vitali's fellow-servicemen refuse to believe that he committed the crime. They said that Smirnov had no reason to take revenge against anyone: “He was being laughed at sometimes, but he was never beaten up,” a serviceman said.

The court martial found Smirnov guilty of causing severe deliberate damage to people's health, which resulted in one lethal outcome. Vitali Smirnov did not plead guilty in the process.