“I want to look slim and beautiful again. I need to slim down before the holiday season starts,” the 37-year-old Irina would say to her mother. She lived in the city of Irkutsk, in Siberia. 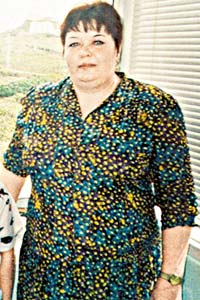 She was severely overweight. “I’m just sick and tired of being a fat lady,” she used to say.

Irina put on a lot of weight after she gave birth to her second child. She had been an easygoing personality, a tall (180cm), statuesque woman before her second pregnancy. She gained her weight in a matter of weeks, going from 78 kilos to 156 kilos.

“All of us still loved her the way she was,” says Irina’s mother Tamara. “But she was unhappy about her obesity. She was just dreaming of that Hollywood standard – 90-60-90. She could hardly fight back her tears as she watched flicks starring Sharon Stone and the like. She wanted to be as shapely as those Hollywood movie stars. She would put herself on a diet but nothing seemed to work.”

Then one day a girl friend lectured her on liposuction. Irina made up her mind straight away. She wanted to get rid of 50 kilos all at once.

At the beginning, doctors plainly refused to perform surgery due to possible complications, which were likely to affect the patient after such a dramatic reduction of weight.

“I just don’t understand what risks they’re talking about. They will cut all that ugly fat off my tummy. No big deal,” she would say reassuringly to her friends and relatives.

Finally, she found a surgeon who agreed to perform a surgical operation on her.

On the night before the operation Irina was dreaming of a party she would be throwing right after she got back from hospital, looking fresh, young and pretty. Together with her beloved husband and children she will celebrate her victory over obesity!

Doctors had to cut the operation short. The patient went into a coma. A blood clot tore off the vein and moved up to the lungs. Doctors were trying to save Irina’s life for three days but to no avail.

A postmortem showed that Irina’s death was an accident. The young woman died due to a lack of full examination prior to the operation.