Anatoly Chubais knows, who was standing behind the attempted assassination

Armed criminals attacked the motorcade of Anatoli Chubais, the father of all Russian oligarchs, in the Moscow region yesterday. No one was injured as a result of the attack, a spokesman for the Moscow region Internal Affairs administration said. “Neither the chairman of RAO UES of Russia (the Russian energy giant), nor his bodyguards were injured as a result of the incident,” the source said. 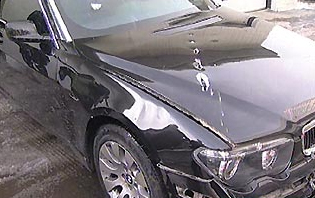 The incident occurred early in the morning on March 17th, at about 9:30 a.m. An explosion happened between the armored BMW vehicle, in which Anatoli Chubais was staying, and the Mitsubishi-Lancer car, in which the official's bodyguards were accompanying him. The blast was equal to 400-500 grams of TNT.

Chubais's vehicle slowly pulled out from the site of the blast. Anatoly Chubais's security stepped out of the vehicle, but the criminals attacked them with automatic fire. The bodyguards started firing back, got in the car and left. The criminals were reportedly dressed in winter camouflage – they disappeared in the forest. 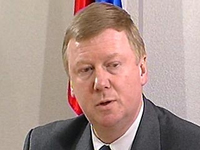 The explosion left a shell-hole on the freeway and damaged several cars, which were passing Chubais's motorcade. Special services shut the traffic of the freeway down and started investigating the accident.

The head of the energy giant RAO UES of Russia, Anatoly Chubais, arrived at his office and started working. “I clearly understand, who can be standing behind the today's attempt on my life,” Chubais told reporters. The official emphasized that he was determined to continue the work to reform the energy industry and unite Russian democrats. “I am going to double my efforts on everything that I was doing,” said he.

The speaker of the Russian State Duma, Boris Gryzlov, said that the attempt on Anatoly Chubais's life was a blasphemous crime. “It is blasphemy, it cannot be disregarded,” Gryzlov told reporters.