The Mi-8 helicopter of the Russian federal troops crashed in Chechnya today, an official spokesperson for the Chechen Interior Affairs Ministry said. The helicopter crashed on its way from Beslan to Khankala. 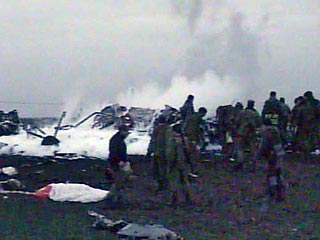 ”The detailed examination of the site of the accident showed that 14 people have been killed in the crash,” the source said. One more person has been reportedly injured. According to the source from the ministry, there were 15 people on board the crashed helicopter: 12 passengers and three members of the crew.

News agencies report quite contradictory information about the number of victims and the number of actual passengers. RIA Novosti news agency reports that the crash killed 12 people. Itar-Tass reported 14 victims.

The crashed Mi-8 chopper reportedly belonged to the Russian border troops deployed in Chechnya. Detachments of the Russian federal forces and the Chechen Interior Affairs Ministry left for the site of the accident.

”It is not ruled out that leaders of illegal armed groups might soon announce that the helicopter has been downed. This version is absolutely groundless,” Deputy Foreign Affairs Minister of Chechnya, Sultan Satuyev said.

For the time being, investigators are working on two basic versions of the catastrophe: a technical malfunction or a piloting mistake. The accident has become the first crash of a military helicopter in Chechnya in 2005, Interfax reports.