The Moscow Office of the Public Prosecutor is to file an unprecedented case today. It will be the first time in legal practice, when a lawyer might go on trial for hindering justice. The investigation is to take quite a lot of time. It is not ruled out that the process will end up with a reform of the recently established system of juries, not to mention the fact that the person on trial, Viktor Parshutkin, might be deprived of the status of a lawyer. The current scandal in the Moscow City Court has no equal. 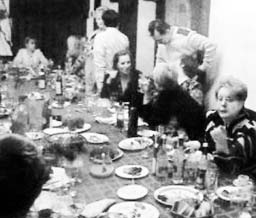 Members of the jury joined two defendants for a festive celebration of the not-guilty verdict. The judges were boozing fervently – some of them were hospitalized with alcoholic intoxication. The photograph in this article depicts the people, who are supposed to stay on the opposite sides of the bar: the judges and their defendants. The party was organized to celebrate the not-guilty verdict that the jury had brought down on the defendants at court. As one can see on the photograph, the two sides were happy to join each other to enjoy the successful end of the legal process.

Liberals and human rights activists have a great fondness for juries. They believe that a jury is an ultimate manifestation of democratic justice, for the majority of professional judges are prone to bribery and higher echelon instructions. Liberals do not change their viewpoints even when the jury release terrorists. There can be quite a number of such occurrences found in the Russian legal practice. The case of Mairbek Shebikhanov can be a bright example of it. The jury acquitted the terrorist, who subsequently took part in the hostage crisis in Beslan: Shebikhanov was released in Ingushetia 1.5 months before the tragedy occured.

Here is a typical social description of the Russian jury: an electrician, a small businessman, a mechanic, an editor of a little-known newspaper, someone unemployed and several pensioners. It is clear, why lawyers enjoy working with the jury: it is easy to manipulate those, who know nothing about the law. Unlike professional judges, pensioners and mechanics are very susceptible to the art of talking. A verdict, therefore, depends on the skills of an attorney, not on the evidence of the prosecution.

The above-mentioned unexampled trial to be launched in the Moscow Office of the Public Prosecutor has the following story. Two young men were the defendants in the trial of smuggling. The men were charged with organizing a criminal group, smuggling, money-laundering and swindling activities. According to investigators, the two men caused the 22-million-ruble damage to the state smuggling tobacco products to Russia. The jury started hearing the case in June of 2004. The members of the jury (the majority of them were women) were imbued with compassion towards the defendants. They were saying that the young men had been arrested for no particular reason, whereas real criminals were enjoying freedom.

Viktor Parshutkin, an experienced lawyer, sensed the weak point of the jury and decided to gain some advantage from it. Members of the jury were holding their breath as they were listening to Parshutkin speaking at the trial. They were not interested in the arguments of the prosecution at all. The defendants were found not guilty on February 3rd, 2004. The jury was supposed to answer 285 questions to make the final decision on the matter, but it took it very little time to put an end to the process. As it turned out later, those of the jury, who considered the defendants guilty of the crimes, were not allowed to vote on the verdict.

The jury, the two defendants and the lawyer celebrated their success in a restaurant just an hour later, with snacks and vodka. The party started at 6 p.m. and ended at 2 a.m.

Spokesmen for the Moscow Office of the Public Prosecutor said that lawyer Viktor Parshutkin's actions could be categorized as criminal according to Article 294 of the Russian Penal Code – hindering justice.