The stench on the site of the debris is unbearable

Relatives of Beslan hostages found a scrap-heap of former hostages' belongings. Burnt pieces of school desks, ragged clothes and human hair were found in the pit near the road-metal works in Beslan. Those, who visited the dump, said that parents of the killed children found a grenade and a military backpack, which probably belonged to terrorists. The people also found fragments of steel fittings, on which the terrorists fixed their bombs in the gymnasium of the seized school. 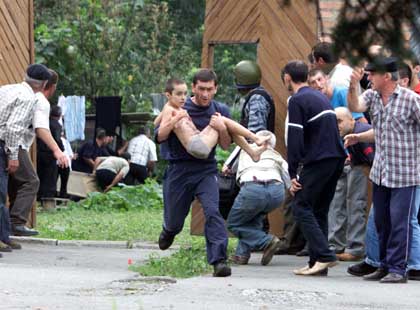 Parents came across the dump incidentally. “About ten parents went to the road-metal plant on February 22nd to find the dump. There were rumors about that heap of garbage, but the relatives did not pay much attention to it for some reason. Someone called the relatives, who lost their loved ones in the terrorist act in September, and they arrived to the scrap-heap with a camera,” a member of the teachers' committee said.

Spokespeople for the committee said that they knew nothing about fragments of hostages' bodies that were supposedly found in the pile of garbage. Such a possibility is not ruled out, though: the stench on the site of the debris is unbearable. The smell became especially putrid when the snow thawed out.

Local authorities have not released any comments regarding the horrible finding in Beslan. “Apparently, the debris was cleared from the site of the terrorist act rather hastily, the next morning after the school had been stormed. One shall assume that there was no criminal expertise conducted with any of those things,” an official said.

Sappers examined the dump near the road-metal plant, but did not found anything dangerous there. Former hostages' relatives have already raked and shoveled the heap of garbage aside. Police officers sealed the found things and took them away to be examined, Gazeta.Ru wrote.

Local authorities do not know, how former hostages' things, hair and fragments of their bodies found themselves on the dump. It is also very hard to find out the exact date and time, when the garbage was removed from the stormed school. The debris was supposedly taken out on September 4th, when excavators were working in the demolished school. A local official said that the garbage had been removed on September 10th, but the precise date is not known.

The parents, who lost their loved ones in the terrorist acts in Beslan, have been looking for their children's belongings since September of 2004. The people have not decided yet, what they should do with the uncovered things.