Skinheads locked up in Siberia but not for racially motivated attacks

Russian courts are refusing to accept that skinheads have been causing ethnic strife. They walk around carrying knives, ropes and iron bars which show their racial superiority over dark haired passers-by. On Tuesday a huge legal case against a group of skinheads, accused of beating people from Tajikistan and Uzbekistan, was concluded in Novosibirsk. Members of the group, which calls itself the ‘White Brotherhood’, have been sentenced to up to ten years in prison for robbery and grievous bodily harm. However, the judge does not believe that their actions were racially motivated. The State Prosecutor in the Novosibirsk case, in contrast to his colleagues in Moscow who presided over the Alexander Koptsev affair and those in St Petersburg who recently dealt with the case of a murder of a ten year old girl, was not prepared to change the sentence which he deemed fair. 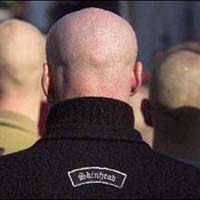 Skinheads locked up in Siberia but not for racially motivated attacks

People in Novosibirsk have been shocked by the appearance of a skinhead group in their city. On 21 August 2002 near Chilovsky market on the outskirts of Novosibirsk members of a skinhead group, formed by Mikhail Rodoshkevich, attacked two Tajikistanis. They severely beat the men, one of whom lost consciousness, then stole 200 roubles and took their things. On another occasion the skinheads beat two Tajikistanis near a student hostel, where a number of illegal students from Central Asia were living. One of the Tajikistanis was stabbed eighteen times. On 3 November the group went “hunting” with knives, iron bars and electric stunning devices. They found their first victim near a bus stop. They severely beat the Tajikistani builder, but when he tried to fight back, they stabbed him eighteen times and stole his coat. They then attacked an Uzbek man in front of his Russian wife and young daughter. The man received many cuts and his wife called for an ambulance and the police, who managed to arrest a few of the attackers on the spot. The motive behind the attacks later became clear. In searches of homes of the arrested men nationalist symbols, books and recordings were found. The group of 16-20 people, who come from various regions of Novosibirsk, systematically met up every weekend and read extremist literature. The aim of the group was to “clean the town of people of non-Russian decent.”

The case against the skinheads began on 7 October 2003. The public prosecutor called for members of the skinhead group to be imprisoned for between five and ten years. Nearly a hundred witnesses were called who knew about the existence unofficial group. The cases became drawn out when witnesses started refusing to give evidence. Psycho-analytical tests were carried out on the leader of the group Mikhail Rodoshkevich and he was declared to be not of sound mind. In the course of the legal proceedings the accused did not confess to the alleged crimes and even tried to make themselves out to be victims. One of those accused Dmitri Shirohik said that “for the last three years whilst these proceedings have been taking place, I have had to give up my studies, work and the opportunity of a family life.”

Throughout the case the accused and their friends behaved rudely and even aggressively. Threats were made to the state prosecutor and the judge. Delivery of the verdict took two days. On the first day in summing up the sentence, the judge said that the accused were guilty of carrying out four attacks, but were not guilty on the other count of carrying out racially motivated attacks.

The verdict pleased the prosecutor. He announced to journalists, “The judge correctly assessed the actions of the accused members of Rodoshkevich’s group and handed out appropriate sentences. The so called skinheads’ nationalist slogans were a front for committing such crimes and for personal gain.” He announced that some changes had been made in the law and as a result it was not possible to convict the accused men of inciting racial hatred. However, in his opinion the motivation behind the attacks really was personal gain and not racial hatred. “The slogans gave the group the cohesion and unity needed for committing such hideous crimes, but the main motivation was profit. The group has been branded with the term “skinhead”. During the course of the case we examined different people including people who are liked to this movement. However, these people do not commit crimes and do not aim to steal from people. At the current time “skinhead ideology” is not illegal. The term skinhead has various meanings, notably in Britain.”