Twenty-four-year-old native of Chechnya, Nurpasha Kulayev, was nabbed during the peak of the hostage crisis in Beslan

The Russian Office of the Prosecutor General finished the preliminary investigation of Nurpasha Kulayev's case – the only terrorist, who stayed alive after the terrible hostage crisis in Beslan. The terrorist has been charged on eight articles of the Russian Penal Code: gangsterism, murder, androlepsy and intention to kill law-enforcement officers. The terrorist's criminal case will be sent to the Supreme Court of North Ossetia at the end of February. 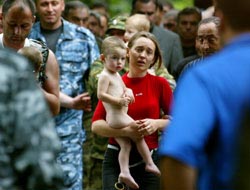 According to the acting chairman of the Russian Office of the Prosecutor General in the Northern Caucasus, Nikolai Khazikov, the interrogated terrorist pleaded guilty, albeit partially. Nurpasha Kulayev particularly rejects his guilt of murder and intention to kill police officers.

Twenty-four-year-old native of Chechnya, Nurpasha Kulayev, was nabbed at night of September 3rd, during the peak of the hostage crisis in Beslan. The Chechen man got out of the seized building, managed to go through three police cordons and hid himself underneath a KamAZ truck, which belonged to a local special police unit. The truck was parked about 300 meters far from the site of the tragedy, near a local police department. Kulayev would have escaped unnoticed: dozens of local residents were hiding themselves underneath the trucks, trying to avoid stray bullets. The skinny young man of low stature, dressed in a track suit, did not look conspicuous against the background of other people. The terrorist's stubble and hand beads, which are not popular in Ossetia (although they are widespread in Ingushetia and Chechnya), ruined Kulayev's plan, and he was eventually arrested. A local resident told a police officer that there was a suspicious man hiding underneath one of the trucks nearby. A crowd of people immediately dragged Kulayev from under the truck and asked for explanations. The man was trembling all over. He was counting his beads and reiterating one and the same phrase: “I did not kill anyone, I want to live, I did not kill.”