Moscow's water park was most likely attacked by terrorists

The investigation of the tragedy, when the glass-and-concrete dome of the water entertainment complex tumbled down on its visitors, still continues

The huge dome of Moscow's water entertainment complex, Transvaal Park, collapsed a year ago, on February 14th, 2004. Twenty-eight people were killed as a result of the tragedy; over a hundred were injured. A lot of people became disabled individuals for the rest of their lives as a result of the visit to the Moscow aquapark a year ago. 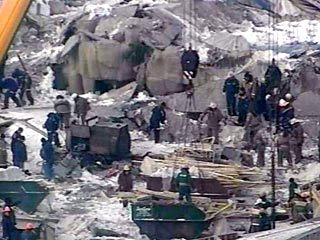 Transvaal Park was the first water entertainment complex built in Moscow. It enjoyed great popularity among Muscovites and people from other cities, especially in freezing winter weather. There was a very popular nightclub in the complex, in addition to the actual water park. The entertainment center was brining joy and pleasure to all of its visitors until February 14, 2004, when the roof of the huge complex tumbled down on its visitors' heads at 7:15 p.m.

A terrorist act version surfaced at once. The only evidence, which was exposed to the public eye, was a tape made by a surveillance camera inside the complex. The video footage showed the moment, when one of the bearing columns cracked, subsequently leading to the destruction of other concrete supports of the roof. It took mere seconds for the roof to collapse.

Some specialists, however, said that they had seen a cloud of smoke and concrete fragments gushing out of the support that collapsed first. Architect Nidar Kancheli, who designed the roof of the water complex, said that the burst looked like an explosion. According to the architect, it turned out during the investigation that all concrete supports were identically deformed as they hit the pool edge on the floor. Only one of the seven pillars was fractured in a different place. It was impossible to investigate the matter further, the architect said, because rescuers removed all the columns from the site of the tragedy and piled them up nearby, damaging their surface even more. 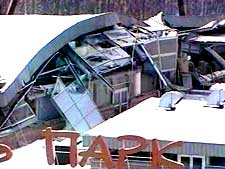 Investigators concentrate their attention on the following reasons of the tragedy: design mistakes, construction mistakes, improper operation regime and incorrect assembly. Needless to say that both architects and builders deny their guilt. Spokespeople for the companies that were involved in the construction of the water complex said that the glass-and-concrete dome of Transvaal Park and its concrete supports guaranteed ten years of reliable operation before the first need in repairs could occur.

Some experts believe that the tragedy in Moscow's water park could have been caused with a concourse of circumstances. There is a so-called “catastrophe theory” in the field of engineering. The theory says that if certain system parameters do not comply with a standard, it avoids a process of gradual worsening and results in an immediate catastrophe.

Russian authorities persistently reject the version of the terrorist act, paying all their attention to technical drawbacks. The terrorist version might not be good to Transvaal's real owners (the company Inteko is supposedly listed among them: the company is chaired by Elena Baturina – the wife of Moscow Mayor Yuri Luzhkov). The building of the entertainment complex was insured against all accidents, but a terrorist attack.

The terrorist version is not good for the authorities either. It is clear from the past experience, when the government strongly rejected the terrorist act version after the double air crash in Russia in August of 2004.

Dmitry Denisov and Tamara Papitashvili, two of the survivors of the Transvaal tragedy, filed lawsuits at a Moscow district court last Friday. Dmitry and Tamara lost their loved ones in the disaster; Tamara lost her both legs in the tragedy too. The plaintiffs can not make the authorities do anything about their case because the investigation has not been finished yet.

The investigation has been prolonged. However, it is impossible to say that law-enforcement officers will find the truth about what happened in southwestern Moscow a year ago. The Transvaal survivors will not be able to forget their grief during five months – the state must do everything possible to help them.