It is not the first time, when the Chechen warlord is said to be “killed”

An official source confirmed rumors about the killing of infamous Chechen warlord Shamil Basayev. The terrorist was killed in an “incidental” shootout between Chechen and Arab hirelings, a high-ranking Abkhazian official said. 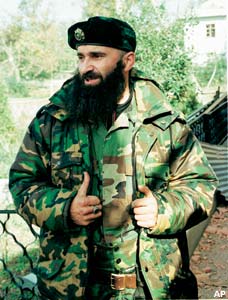 The above-mentioned armed clash took place in January. Shamil Basayev and his terrorists supposedly found themselves in the middle of a shootout between a group of Chechen gunmen and international mercenaries. The conflict reportedly occurred because of embezzlement of the funds assigned for “jihad.” According to another version, Basayev was killed in one of ongoing never-ending battles with Russian federal troops. This version was particularly discussed in the Chechen diaspora of Azerbaijan, Utro.Ru reports.

Spokespeople for Russian special services were not rather enthusiastic in their comments regarding the killing of the Chechen terrorist. It was simply said that the information would have to be checked. It is worth mentioning that it is not the first time, when the Chechen warlord is said to be “killed.” Shamil Basayev has already managed to “resurrect” several times.

Deputy Chairman of the State Security Service of Abkhazia, Yuri Ashuba, has recently released another statement on the matter. “There are certain rumors about Basayev's death, although one may not say that they are widespread rumors. They can be heard from the people, who were in contact with Basayev during the war between Georgia and Abkhazia in 1992-1993,” the official said. Ashuba also added that one of the terrorists' wives (she is of Abkhazian origin) reportedly learned about her husband's death from Chechnya at the end of January. According to Ashuba, there is another version about Basayev's death: Chechnya's prime terrorist supposedly died of a chronic kidney disease.

Shamil Basayev, also known as “Gynaecologist” (he was nicknamed so after he took dozens hostage in the maternity department of the Budyonnovsk-based hospital in Russia) has been charged with tens of terrorist acts committed on the territory of Russia. The Nord-Ost hostage crisis in the Moscow music theater was considered the most dreadful one of them, but the attack of the theatre paled in comparison with the tragedy in Beslan.