”Job opportunities for women. Accommodation guaranteed.” Such job ads can be found in many Russian newspapers nowadays. Everybody knows that pimps most often use such ads to hire young girls to work as prostitutes in brothels or just in the streets. Despite the public awareness of such a demeaning fact, hundreds of Russian women still fall victims to their own naivety. Only a few of them manage to escape from hell. 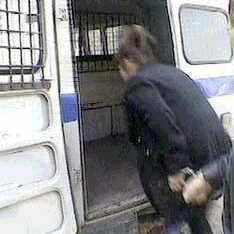 The Office of the Public Prosecutor in Khabarovsk (Russia's Far East) instituted criminal proceedings on the fact of human trafficking yesterday. As it was revealed during the investigation, the company Media Service was running the human trafficking business in the city for 2.5 years. The company was publishing job advertisements in local newspapers, inviting young girls for prestigious work in European countries. Several hundreds of women from Khabarovsk responded to Media Service's ads. It is hard to say why women were so attracted to such a doubtful opportunity: they were either too naive, or they probably wanted to leave Russia at all costs.

Media Service had an agent, a Moscow-based company, which would select prettiest girls and send them to Russia's capital. In Moscow, girls would receive Israeli visas and leave Russia. In Tel Aviv, Russian girls would be sent to a slave market, on which they would be sold to pimps from China and Middle Eastern states. They purchased Russian girls from Khabarovsk for their brothels.

”The prestigious work in Europe” turned out to be not prestigious at all, not to mention the fact that it was not in Europe either. Media Service has sent abroad over 300 girls during 2.5 years of the company's work. The firm would receive the profit up to $3.500 for each girl.

The police learned about the criminal activity of the Khabarovsk-based company from several sex slaves, who managed to escape from their owners. The owner of Media Service, a woman, has been arrested, although four of her accomplices have been released on a written statement not to leave the city.

Another businesswoman involved in the human trafficking business was arrested yesterday in Ukraine. A female resident of the town of Suma was selling women to Turkey for four years from 2001 to 2004. As usual, the woman was promising bright future to all her “employees” – wonderful jobs, high wages and comfortable accommodation. Instead of living in cozy houses, girls had to work in brothels as prostitutes. The 44-year-old female pimp has sent 20 Ukrainian girls to Turkey, but only a small part of them managed to return home.