Authorities in the Russian capital say that 48 people died when the roof of the Basmanny (Bauman) market in Moscow collapsed. 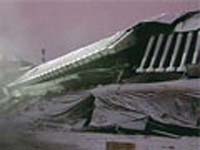 It has been reported that no fewer than 30 people have been injured.

Two people are in a critical state in the 36th Clinical Hospital, nine people are at the Bauman Hospital and another four are at Sklifosovsky Hospital

25 cars with people in parked next to the market were also crushed when the roof fell in. Emergency services are now at the scene.

Mayor Yuri Luzhkov announced that the incident was not an act of terrorism. Luzhkov said that the roof could not withstand the weight of the snow.

“The roof should not have caved in because of the snow since there was an open drain. It was thought that any special drainage system had to put in place for such a roof.” said Luzhkov.

Moscow’s Mayor, in response to questions from journalists, said that necessary help would be given to the victims. “We have already had experience of such sad work.”

Furthermore, Luzhkov has cancelled his trip to Turin to the Winter Olympics because of the incident at the Bauman market.

Emergency services are trying to save eleven people from underneath the rubble.

Victor Beltsov, the deputy of the Ministry for Emergency Situations, said “Sniffer dogs continue to work in the area and have so far found eleven places where there are living people. This information is now being checked out.”

The emergency workers constantly have minute’s silence in order to listen and see if anyone is calling out.

The Ministry for Emergency Situations said that there are still ten people alive underneath the rubble and that contact has been established with them. “The victims knock, call out and the rescuers try to find a way to reach them,” announced the Emergency Situations Minister Sergei Shoigu.

He said, “The work will go on for twelve more hours. As you see, we are not using any heavy technical equipment since there are still people underneath the rubble.”

Speaking of the problems which face the emergency workers, the minister said, “The layout of the market hall is complex and it is difficult to get to the people.” Heaters are pumping warm air into the market hall.

The alarm was raised at 5.20am Moscow time. The market area is approximately 13 000 square meters. Interfax reports that the main reason being put forward for the disaster is an accumulation of wet snow on the roof of the building,.